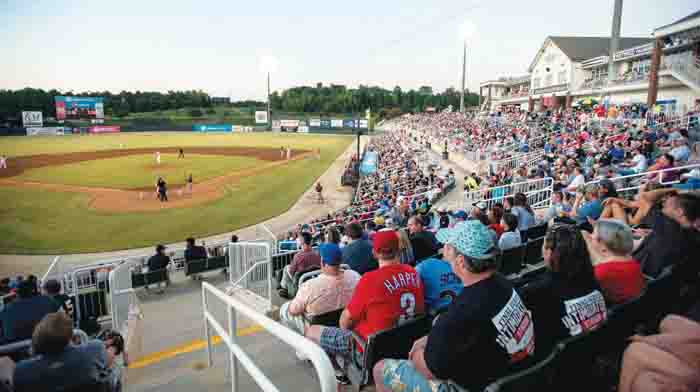 The ballpark was packed for the last game for the Kannapolis Intimidators at the Moose Road Stadium in 2019. Jon C. Lakey/Salisbury Post

KANNAPOLIS — The Kannapolis City Council will vote Monday night on a proposal to turn the former Kannapolis Intimidators Stadium property into a corporate park.

The proposal would allow Fortius Capital Partners to purchase the former Kannapolis Intimidators Stadium for $3 million. The 55-acre site is located on Lane Street near the I-85 Exit 63 interchange. The property is next to Lake Fisher, which is a protected reservoir.

A news release said the site is being sold now that the Kannapolis Cannon Ballers are located in their new home, Atrium Health Ballpark, in downtown Kannapolis. The former stadium will be transformed into a corporate business park by Fortius Capital Partners.

Fortius Capital Partners is a Concord-based developer that is partnering with Richardson Properties as the capital partner and Windsor Commercial as their general contractor. The group plans to build three industrial buildings on the site, ranging from about 100,000 square feet to 300,000 square feet. The site will now be known as Lakeshore Corporate Park. The total development is expected to be approximately 600,000 to 660,000 square feet on about 31 acres of the site, with about $49 million in development costs.

Fortius, which is currently building Meadows Corporate Park in Concord, plans to target manufacturing, assembly and distribution companies to move into the buildings and bring hundreds of jobs to the city, a news release said. Expected buildout is about three to five years. The developer will donate 3 acres at the north end of the site for the city to use for a future fire station.

“Fortius Capital Partners is proud to be a part of the redevelopment of the former Intimidators Stadium into a first-class industrial park. We applaud the City leaders for their bold and transformative vision — not only for this site, but also for downtown — and are thrilled to be a part of that vision,” said Harris Morrison, managing partner of Fortius Capital Partners.

Mark W. Shumaker, vice president of Richardson Properties, said his company is excited about the opportunity to be a partner in the project.

“We believe this is a dynamic location that offers many of the key ingredients necessary to attract high quality tenants/employers that enhance an area’s tax base and quality of life,” Shumaker said.

Mayor Darrell Hinnant said the city looks forward to working with Fortius and watching the property develop into a corporate campus.

“The protected watershed and most of the tree canopy will be preserved, which allows this to remain a beautiful asset of our City while also becoming home to a number of new companies,” Hinnant said.