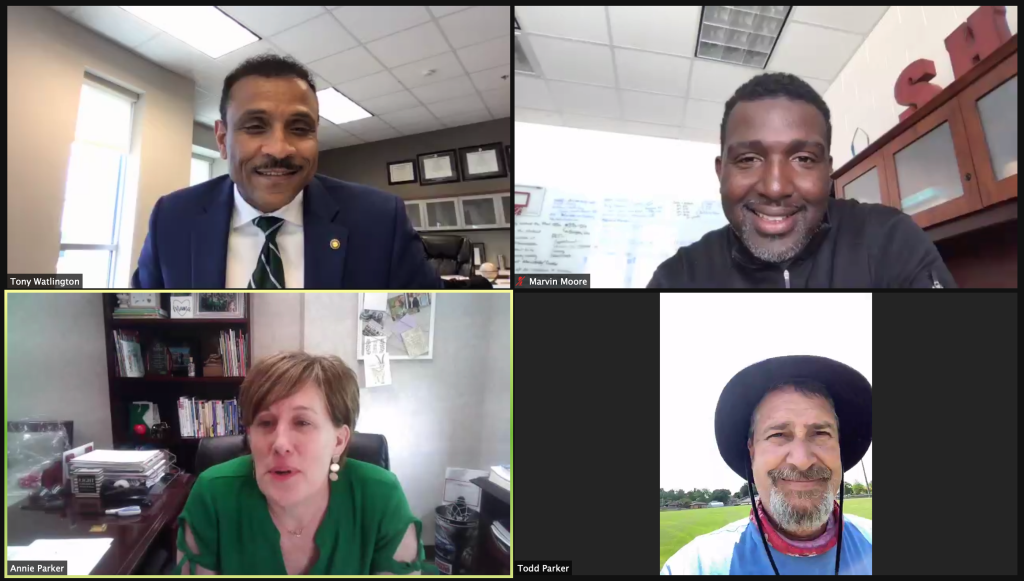 SALISBURY — Rowan-Salisbury Schools on Wednesday named its teacher and principal of the year for the 2021-2022 school year in a virtual presentation.

Faculty and staff tuned in from across the district to hear the results of the annual contest. Superintendent Tony Watlington introduced the program and RSS Board of Education Chair Kevin Jones gave some comments as well.

“In a year like this, I wish we could give out thousands of these honors,” Jones said.

Sally Schultz, the 2020-2021 Teacher of the Year, presented the new new awardee. Zebbie Bondurant, the previous principal of the year, presented her successor as well.

Todd Parker, a Salisbury High School social studies teacher, was selected as Teacher of the Year. Derek DiStefano, principal at Morgan Elementary School, was named Principal of the Year.

Parker has spent 26 years as an educator. He retired as principal at A.L. Brown High School in 2019, planning to leave the profession, but he missed the kids. The same year, he applied at Salisbury High, and this is his second year teaching there. At Salisbury, he is also a men’s track and field coach and assistant athletic director.

Parker said the school took a chance on him, and it has been the most gratifying work of his life.

“I worked for a principal a really long time,” Parker said. “I’ve been a principal of the year for a district. To be a teacher, the business of schools happens in the classroom, with kids.”

Parker said education is about the relationships between faculty and students.

During Wednesday’s award presentation via meeting software Zoom, Parker was on the school’s football field.

“It’s just an honor to be even thought of as a teacher, much less a teacher of the year,” Parker said. “Wow.”

DiStefano was not expecting to win, saying he thought fellow finalist Koontz Elementary Principal Nicole Buckner was the top candidate.

DiStefano is spearheading the effort to move the district toward cutting-edge, competency-based education methods on the school level. The methods teach students concept mastery at their own pace and the district is creating its own assessments to adopt the model.

He was in his office for the presentation, and his staff promptly bombarded him with streamers and confetti when he was told he won.

“I’m truly honored to even be considered for the award let alone to win it with the number of incredible principals and administrators we have in Rowan County,” DiStefano said.

On Thursday, both winners will get a visit from the “prize patrol” with donated prizes.

Parker will get a plaque from Rowan County Chamber of Commerce, $1,000 from Rowan Partners for Education, a round of golf for four at Country Club of Salisbury, a week at the N.C. Center for the Advancement of Teaching and $250 for his classroom via the Phillip J. Kirk Endowed Scholarship among other prizes.

DiStefano’s prizes include a vacation in Isle of Palms, South Carolina, donated by the Judy and Bobby McLaughlin, and a round of golf at the country club.

Both recipients will go on for consideration in regional contests.