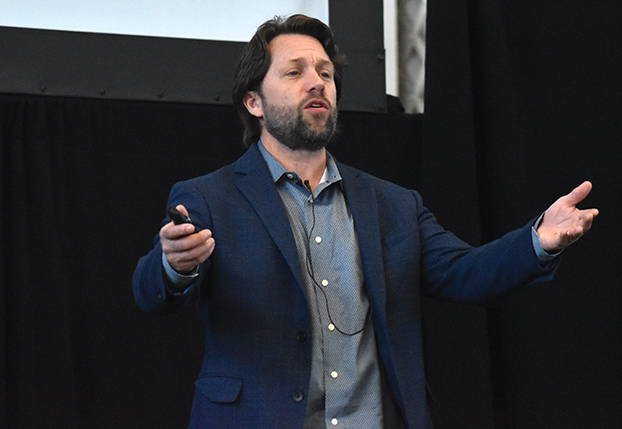 SPENCER — On a stage bordered by signs bearing the logo and branding he helped develop, Steve Chandler spoke to local businesses and community leaders Thursday morning about the progress Rowan County has made in promoting itself.

Chandler, the owner of Chandlerthinks, was the keynote speaker at the Rowan County Chamber of Commerce’s final Power in Partnership event of the season. The event was held among historical cars, planes and trains in the N.C. Transportation Museum’s spacious back shop.

Chandler was introduced by James Meacham, who has led the Rowan County Tourism Development Authority for more than a decade.

“What we’re here for today is to really celebrate the success of the brand efforts here in Rowan County,” Meacham said. “Of the efforts that were launched in 2015 and really came to light in ’16, ’17 and ’18 and survived the COVID-19 pandemic of 2020.”

During his speech, Chandler reviewed the county’s work since his Tennessee-based branding company helped launch the “Be an Original” marketing campaign five years ago. The initial challenge of creating a branding initiative for Rowan County, Chandler said, was changing the way people in the community viewed their home.

“The self-image of this community was not very strong,” Chandler said. “… Outsiders viewed Rowan County in a better light than you did. In fact, that was our theme: stop beating yourselves up.”

The initial goal of the branding campaign, he said, wasn’t even to promote tourism in Rowan County. Instead, it was about celebrating what the area had to offer to those living locally and promoting collaboration between towns and cities. While Chandler said Rowan County has made strides in its positive self-image efforts, he thinks the community still has room for improvement.

Chandler said he is especially impressed with how the entire county has embraced the “Be an Original” motto and the logo that was developed alongside it. Chandler said he’s worked with well over a hundred communities that are smaller, larger and similar in size to Rowan County, but few have embraced a brand so strongly.

“I’ve never worked with a community who has just gone gangbusters with their branding like Rowan County,” Chandler said. “I’m serious. I give presentations on this and I use you as an example. When people ask what it takes, I say it takes energy and enthusiasm by everyone involved in the community. Rowan County is the example.” 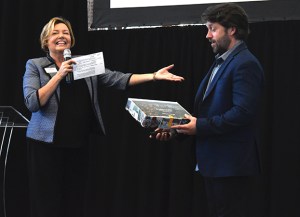 On the screen behind him, Chandler displayed the various ways the county’s towns, government agencies and cultural institutions have adapted the “Be an Original” branding to fit their own message.

“Rowan County is the sum of its parts, so they adapted it but didn’t use it necessarily literally,” Chandler said. “They all maintained their individual identity, yet it fits.”

“I think this year was an incredible stress test, obviously with COVID-19,” Chandler said. “Does a brand matter with that? Well, what’s the brand about? Working together. Did we need to work together last year? Maybe more than any of us have seen since we’ve been born. We had something that could rally us together.”

Before Chandler took the stage, the Rowan County Chamber also held a brief graduation ceremony for the 18 graduates of its 28th Leadership Rowan class. 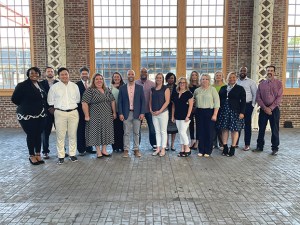 The Chamber is now accepting applications for the 2021-22 Leadership Rowan class. The deadline to apply is June 18. Applications are available at rowanchamber.com.

In addition to the graduation ceremony, Meacham made a surprise announcement that the Tourism Development Authority is launching the Rowan Brand Champion Award. He then announced the first ever recipient of the award was April Everett, creative services manager for Rowan County.

“Today, we’re going to honor one of those champions, someone you in the community may not know, who I would say has been the backbone and the architect of many of the things we see today,” Meacham said, “especially the success on the county level across all of our communities, across all of our platforms, from EMS to Parks and Rec to the airport and county government.”

The Rowan County Chamber of Commerce will resume its Power in Partnership series in September with regular monthly meetings at Trinity Oaks.