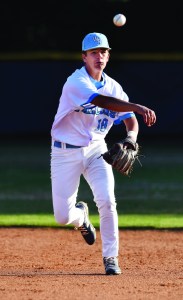 They combined for 10 strikeouts.

Luke Graham had a triple for the Falcons, Drew Burton and Elijah Palmer had doubles.

West had eight hits and drew 10 walks in the five-inning game.

A four-run second inning put the Golden Eagles in charge.

Jackson Murphy and Ellen Yang had doubles, but those were Salisbury’s only two hits.

Chase Ervin went 3-for-3 for the Trojans.