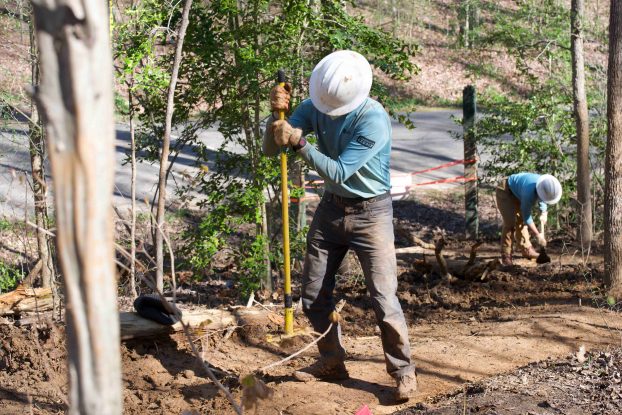 Carl Blankenship/Salisbury Post - Drew Gotwals tamping a new trail off of Rowan Avenue. The crew replaced the existing trail that lead straight up the hill with a more sustainable switchback.

SPENCER – The town is preparing to expand the Stanback Educational Forest and was recently awarded a grant to help develop future trails at the park.

The Blanche and Julian Robertson Foundation approved $10,000 to help the town with expenses in constructing new trails, signage and infrastructure at the park’s 50-acre expansion.

The purchase of the property is being arranged by Three Rivers Land Trust, which plans to transfer the property to the town.

Town Projects Manager Joe Morris said the funding can be used for needs as they arise, whether it is buying rocks, building bridges or helping supply the Conservation Corps employees.

The park is named for Fred and Alice Stanback, but the Robertson Foundation has deep ties to the project as well.

Foundation Executive Director Jason Walser recounted the origin of the park. In 2009, shortly after the 2008 financial crash that led to the Great Recession, a developer was trying to get what cash he could out of the property from timber sales and had equipment on the property to start harvesting.

The community rallied and saved the property. The first major commitment to the park came from the Robertsons.

Walser said helping fund the expansion infrastructure was brought to the foundation as part of its spring funding cycle and the project was compelling to the board. Walser said he could not be more happy with the development of the passive park.

“It has become better faster than I ever dreamed possible,” Walser said. “I did not know the pieces would come together as well as they have for the community.”

“They deserve all the credit,” he said.

Morris presented the grant to the Spencer Board of Aldermen for formal approval on Tuesday. He told the Post the town has had a good relationship with the Robertson Foundation over the years and the park has been a major asset to the town.

“It is a beautiful little slice of life that people appreciate,” Morris said.

The goal is to eventually connect Spencer to the Salisbury greenway as well. The town also has some trail development plans coming up on the other side of town at Wilcox Bridge on the line with Davidson County.

SPENCER — During its Tuesday meeting, Spencer Mayor Jonathan Williams asked for an update on a reported rat problem on... read more