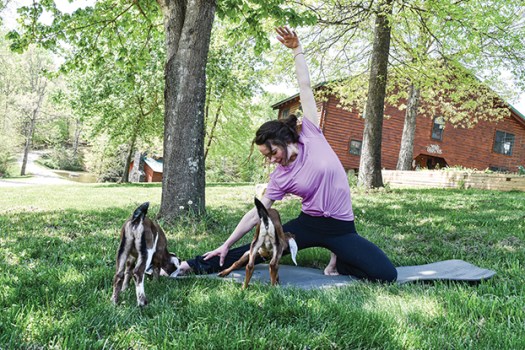 Madison Noble practices her yoga with a couple of the farm's baby goats. Photo submitted. 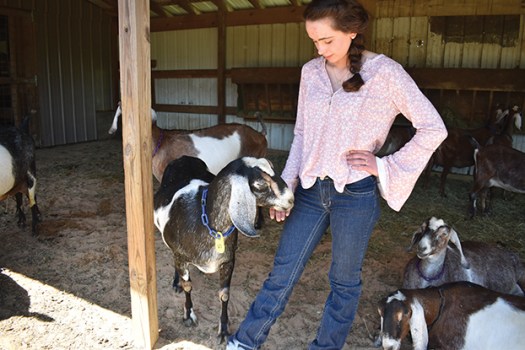 Madison Noble, who will soon be teaching goat yoga, pets a friendly goat outside of the barn and creamery. Ben Stansell/Salisbury Post 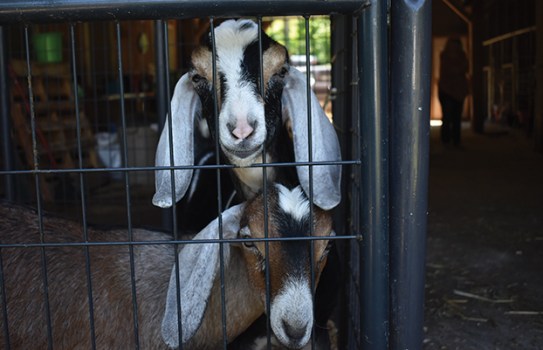 Two Nubian goats poke their heads through their holding pin. The young goats will be raised separately from the adult goats on the farm until they are almost a year old. Ben Stansell/Salisbury Post

CLEVELAND — During kidding season, there’s not a lot of sleep to be had at Liberty Farm and Creamery in western Rowan County.

Kidding season — stretching from early February through the end of March — is when pregnant goats, called “does” or “nannies” by some, birth their young, which are called “kids.” Never knowing exactly when a doe might go into labor, it’s also when Madison Noble and her mother Glenda stay on the farm at almost all times.

“They’ll kid (give birth) whenever they please,” said Madison, who helps lead the farm’s goat operation and burgeoning creamery business. “In the middle of the night, in the afternoon, so we have to be here pretty much 24/7.”

After they’re born, the infant goats will live and be bottle fed in a room in the family’s home for several days. From there, they’ll go to a spacious barn on the farm’s property, kept away from the mature goats for the first year to avoid any potential for contracting harmful diseases.

The dozens of baby goats born on the farm this spring will do more than just bide their time before they move into the adult barn and a bigger pasture. They’re going to be an integral part of the farm’s new goat yoga classes.

Goat yoga, the practice of performing yoga positions with young goats roaming around, has been an increasingly popular trend across the country for the past several years. After multiple people encouraged her to start her own goat yoga studio at the farm, Madison decided to give it a go.

Having never practiced yoga before, the 20-year-old is now on her way to earning her yoga teaching certificate. Once she’s officially licensed, she’ll start offering classes on the farm’s picturesque open fields. A wait list for the classes has already formed.

Baby goats, Madison said, make for surprisingly good yoga partners. With no sense of personal space and a gentle, yet rambunctious demeanor, goats will climb and jump on participants at their leisure.

The goats at Liberty Farm and Creamery are especially used to people.

“They’re played with and loved on and handled from the moment they’re born,” Glenda said.

The Noble family has lived on the rolling hills of the 96-acre farm for five generations and. started raising goats as backyard pets in 2006. When a group of dogs got into the herd and killed them, the family was forced to start over from scratch. By 2010, the first babies were born on the farm and the herd has been growing ever since.

There are currently 28 milking goats on the farm. Most of them are of the Nubian breed, which is recognizable for its floppy ears and coveted for the fat-rich milk it produces. A few of the goats are Toggenburgs, which is a shorter Swiss breed that produces a greater quantity of milk. The Toggenburgs are owned by Madison’s fiancé, Noah Johnson.

Glenda said the reputation goats have for eating anything and everything is simply “an old wives’ tale” that originates from the way the animals use their mouths to feel their surroundings. In actuality, she said, the goats are quite picky. They eat a diet of hay and high protein feed pellets and will forage on nearby plants, like honeysuckle.

In addition to the goat herd, the family also raises chickens, has a horse and takes care of two angus heifers as well.

Madison and Glenda are the goat herd’s primary caretakers, with the rest of the family helping out when they can. Madison’s father, Ryan, was responsible for building the barn, hay shed, milking parlor and soon to be creamery on the property. Her brother Jackson helps and her grandparents, Vivian and Ted, are still involved.

Glenda is a retired veterinarian, which comes in handy whenever a goat gets sick or injured. Madison considered following in her footsteps and becoming a veterinarian herself, but she has always preferred working on the farm to studying in the classroom.

“I just love spending time with the goats and working on our breeding program,” Madison said.

The farm has long sold goat’s milk soap, but will soon add goat cheese as well. Over the years, the family has experimented with different flavors sampled at their dining room table and has developed several go-to recipes, including a Tuscan herb and a dill and chive chèvre. 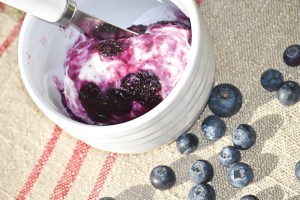 The farm, Madison said, will try making fresh mozzarella this summer. Although mozzarella is traditionally made from water buffalo milk or cow’s milk, Madison thinks mozzarella made from goat’s milk might be the best of the bunch.

“We’re partial to the goat mozzarella,” Madison said. “It’s so creamy and the texture is great.”

Once the farm receives its Grade B certification to make and sell the cheese, Madison said the farm’s products will be available at farmers markets in Davidson and Salisbury, as well as at the farm’s shop online at www.libertyfarmandcreamery.com. The farm also hosts education farm tours and will begin to open its small farm store on designated weekends.