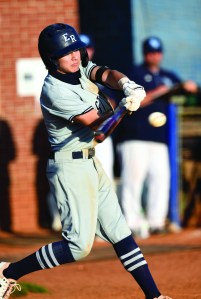 The Hornets came close to a big upset. Down 4-1, they scored two runs in the fifth and one in the seventh to force extra innings.

Vance Honeycutt opened the game for the Hornets (2-2, 1-2) with a double and scored on Kaleb Burleyson’s single.

Honeycutt and Chase Shoaf started the fifth with singles. Honeycutt scored when Burleyson hit into a fielder’s choice. Max Crawford’s double helped the Hornets get within 4-3.

Honeycutt walked to start the seventh. After a wild pitch and a steal of third, Burleyson’s groundout plated Honeycutt for a 4-all tie.

Burleyson drove in three. Honeycutt was 2-for-2 and scored three runs.

Honeycutt, Shoaf and Burleyson pitched for the Hornets, with Shoaf pitching five innings of relief. Burleyson took the loss.

Jake Hunter, Chance Mako, Bryson Shive and Mattox Henderson combined on a one-hitter with nine strikeouts in the five-inning game.

Christian Nicholson had an infield hit for the Greyhounds (0-5, 0-4).

East hitters went 18-for-32. Aiden Schenck went 3-for-4 with four RBIs. Cameron Padgett was officially 0-for-1 but scored three runs and drove in four.

Davin Whitaker had two of Davie’s five hits to back a strong pitching performance by Zach Rodgers.

Rodgers went the distance, scattering seven hits, striking out three and walking one.

Davie (3-3, 3-1) scored the deciding run in the bottom of the seventh with the the aid of three miscues.

The biggest game tonight is Carson at West Rowan in the North Piedmont Conference.