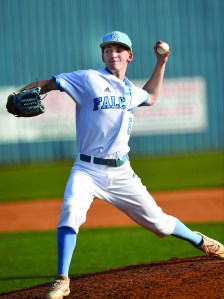 Junior lefty Casey Gouge provided most of the excitement. Gouge stopped Carson’s offense until he reached his pitch-count limit (105) with two outs in the sixth inning.

He allowed three hits, striking out eight and walking two.

Gouge (2-1) was pitching in this third big county game already. He won 3-1 against South Rowan and took a 2-1 loss against East Rowan.

Gouge also provided most of the Falcons’ firepower at the plate. He drove in five runs himself with two big hits.

Carson (4-2, 3-1) scored in the top of the third after CP Pyle’s leadoff single. Pyle eventually scored when Jordan King was hit by a pitch with the bases loaded. Gouge got the third out on a groundball to strand three, and the Falcons (3-3, 2-2) took charge of the game with four runs in the bottom half of the inning.

Hunter Watts started the bottom of the third against Carson starting pitcher Dylan Driver (1-1) with a single to right. A walk to Andrew Kennerly and a hit by JT Fecteau loaded the bases. Steven Smith walked to force home a run before Gouge doubled to center field to clear the bases.

Gouge maintained that 4-1 lead until he exited in the sixth. Jake Blevins relieved him and got the last out of the inning.

West broke it open in the bottom of the sixth against Carson reliever Mason Duren, scoring three runs with four straight two-out hits.

Pitching for the first time this season, Luke Hiskey tossed the shutout. He needed only 69 pitches, throwing 50 strikes.

Hiskey allowed four hits. He struck out three and walked none.

South scored two runs in the second and two more in the third to take charge.

KANNAPOLIS — A.L. Bown banged out 11 hits, but fell 8-6 to South Meck in a non-conference matchup.

Jaden Johnson had three hits for the Wonders (2-4), while Nate Baucom and Ja’Lan Chambers had two each.

Max Arstark was the winning pitcher for the Bulldogs.