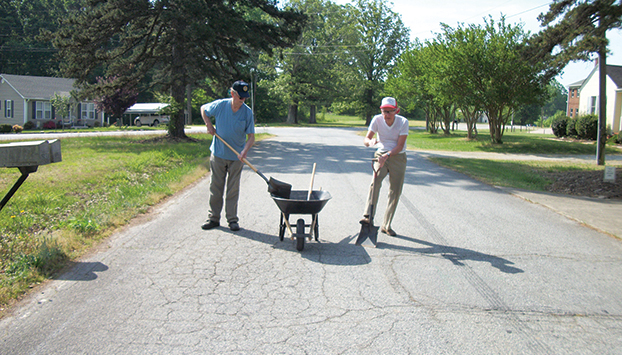 Photo submitted - The Morlan Park Safety Patrol removing lumps from the road in their neighborhood. Jerry Shelby is in white shirt. Bennie Self is in blue shirt.

The Morlan Park Neighborhood Safety Patrol is at it again cleaning up another safety problem on the east end.

For six months, the neighborhood has tried to get the city to correct the safety problems and tripping hazards created on Crown Point Street, Carolina Boulevard, Park Circle, Morlan Park Road and the church parking lot from careless workmanship and disrespect for the neighborhood property and streets when paving Jake Alexander. There were leftover rumble strips, large lumps of asphalt like rocks on the pavement and yards torn up and hazardous conditions in the neighborhood.

The city has stated the asphalt debris is in an appropriate condition compared to other areas in the city. The city council has been invited to compare our street to theirs and to bring their shovels. We are still waiting.

The council must think the east city limits ends at the interstate. Also, if the safety problem is not in their neighborhood, then it is not a problem.

As a member of the safety patrol, we removed the highest ones, but why should we be doing the city and state work again? Spring is here and there will be more riders and walkers going to the park.

This is a walking and bike-riding neighborhood. I have tripped over the lumps during my daily walks and about wrecked my bicycle hitting some. I have tripped going to the mailbox. The kids are riding their scooters and bicycles going to the park. Walkers and parents pushing strollers on their walks have to walk over rumble strips and debris left by the heavy equipment.

Then, buses and other traffic run over it every day, making it harder to clean up.

I used a shovel, chisel and pry off the rocks cemented to the road and clear a path to my mailbox and others. It was hard to remove them. After an hour and with blisters on both hands, I ask why am I doing the city’s job again, which is to make the Morlan Park neighborhood safe. It should be the city addressing the safety issue. 80-year-olds shouldn’t have to do the city’s safety work.

Look at Crown Point, Carolina Boulevard, Park Circle, Morlan Park, Ivy Streets and the church parking lots. It is shameful the mess and safety hazard the state left behind. Now, when we walk, we have to look down for the hazards instead of seeing our neighbors.

Every time I call the city about the safety problem and mess in our neighborhood from the Jake Alexander paving, I am told to call the state at 704-630-3200. Why am I being put off and I have to call the state? The problem is on the city’s streets. The state says they are only responsible for Jake Alexander and they really aren’t responsible for it because it is contracted out to a private company. Also, they are not responsible or the five streets and church parking lot that they messed up. Those streets are the cities, not the state. Why is it that we’re told it’s our responsibility to make it right when we call the city? The state doesn’t return phone calls, answer emails or show up.

It took 14 weeks to finally fix the missing manhole cover before someone walking by fell into it or a kid climbed down it to explore and then couldn’t get out. Why didn’t several of the workers watching the cement dry use a shovel to remove the trip hazards on the streets? Why hasn’t the city made the state clean up the hazards problem?

The traffic in the neighborhood has increased since the city closed Morlan Park Road and rerouted the traffic into our former low-traffic neighborhood. We don’t have the city safety equipment, cutting and grinding machines, orange cones and flashing blue lights from police cars to help protect us.

The Morlan Park neighborhood hopes that this doesn’t turn out to be another Morlan Park Street closing event like a couple years ago. Then, we had to cut down the bushes and trees that were blocking the view of oncoming traffic when the city and state refused to do it. The city and state didn’t listen to the neighborhood, closed the street anyway and made it more dangerous by forcing U-turns instead of going straight. The city is becoming a no-turn, U-turn city.

When a person wants to bring a problem to the city council meeting, they are only interested in buzzing and shutting you off after three minutes and getting you out of there.

I have a logistics and manufacturing background. Our philosophy is if you see a problem or potential problem, you fix it immediately. The city philosophy is when it sees a problem it is somebody else’s problem or wait until somebody gets hurt or killed, then fix it.