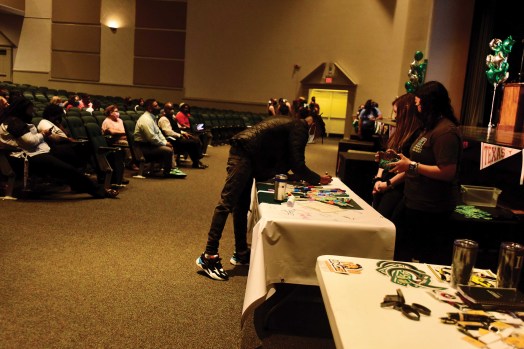 Carl Blankenship/Salisbury Post - Students got the chance to sign a class banner after being recognized on stage. 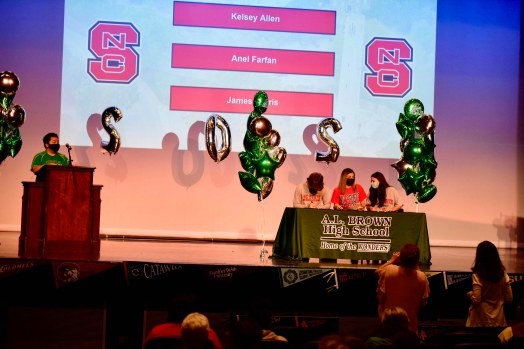 The event celebrates seniors’ next steps after graduation, whether it’s to higher education, the military or the workforce. More than 100 seniors signed up to take part in the event, getting a moment to be recognized on stage in front of their peers at the Kannapolis Performing Arts Center.

The list included 27 four-year institutions and three community colleges. Assistant Principal Sara Newell said there were more commitments among the graduating class who didn’t participate in the ceremony. The program was virtual last year and some students who opted for all-virtual sent their information in to be recognized at the ceremony this year.

Athletic signing days, where athletes commit to play for a school, sparked the academic celebrations at A.L. Brown.

“The athletes got their moment, but kids who were just making a commitment in general to either a four-year college, a two-year college, military, trade school, wherever they were going, they didn’t get that recognition,” Newell said.

Seniors on Tuesday got to ring the school’s bell as they walked across the stage.

“Every time I hear that bell ring, it gives me chills,” Superintendent Chip Buckwell said. “I don’t care if it’s on the sidelines, at an event like this, if it’s at graduation, wherever it is, I get chills.”

“I’m equally as proud of the kids who are going straight into the workforce as I am a kid that’s going to a four-year college,” Buckwell said. “It means a lot.”

Junior marshal McKenzie Graham said seeing seniors going through these steps as they approach graduation has her excited to do the same next year.

“I can’t wait for that to be me up there,” Graham said.

“It’s just always been a passion of mine,” Smalls said.

She said her interest was piqued by seeing the joy cooking gave her mom and grandmother. Her grandmother always dreamed of opening her own restaurant. When her grandmother died, Smalls decided she wanted to carry that legacy.

Today, she dreams of starting her own chain of restaurants and running a bakery.

Last week, Smalls flexed her culinary skills for Teacher Appreciation Week by baking strawberry lemon cupcakes for the entire faculty. She used strawberries grown in the school’s garden and bought all the other ingredients herself.

She baked about 200 cupcakes.

“It was so much fun,” Smalls said. “Even though it was hard work.”