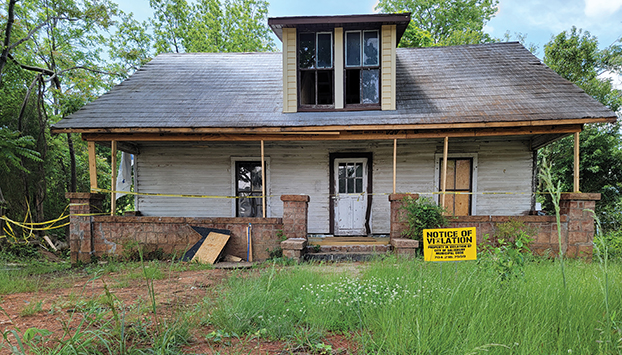 Josh Bergeron / Salisbury Post - This house on South Fulton Street was sold to a Los Angeles company after being save from demolition by the Historic Salisbury Foundation.

SALISBURY — A group of neighbors says it’s curious about the status of a house at 1408 South Fulton St., which sits across from a water tower and within eyesight of Maupin Avenue Presbyterian Church.

The business is registered to a man named Joseph Erik Coy, according to the California Secretary of State’s Office. A call to a number listed for Coy wasn’t immediately returned.

Greg Rapp, who represented the Historic Salisbury Foundation in the sale, said the Los Angeles group intended to further restore the home.

While the revolving fund made some improvements to the home, Stewart said the program is not intended to fully rehabilitate homes.

“We’re stabilizing it, making sure it is air tight, making sure the walls aren’t going to cave in, pretty basic stabilization,” she said.

Still, costs for saving individual homes can sometimes be tens of thousands of dollars.

In the case of 1408 South Fulton St., the home was nearly demolished before the Historic Salisbury Foundation stepped in. During a Nov. 2018 meeting, the Salisbury City Council approved its demolition. The home had been vacant for about a decade and attracted vagrants.

On his real estate website, Rapp said, “This house needed everything. One entire floor was missing from a room at the room at the rear of the home. Folks were advised to bring a flashlight and watch your step.” The home was sold “as is” and included covenants on the deed to protect its historic status.

“That, friends, is not the end of the story, either, but it is the end of this chapter! Now to watch the structure transform into a truly renovated vintage home,” Rapp wrote at the time.

Neighbors who submitted a question to the Post said it appeared someone was beginning to restore the home, but work stopped several weeks ago.

Stewart said she believes the buyer still has a plan to restore the property and that the Historic Salisbury Foundation tries to stay in touch with buyers about rehabilitation plans.

On Monday, a city of Salisbury municipal code violation sign sat in the front yard along with a pile of construction debris. Caution tape was wrapped around the front porch. Plastic wrap covered the side of the home.

Ask Us: Why do newspaper articles capitalize Black but not white?

Ask Us: Who was Mahaley Avenue named after?

Thousands of locals, out-of-towners gather for a groovy time…