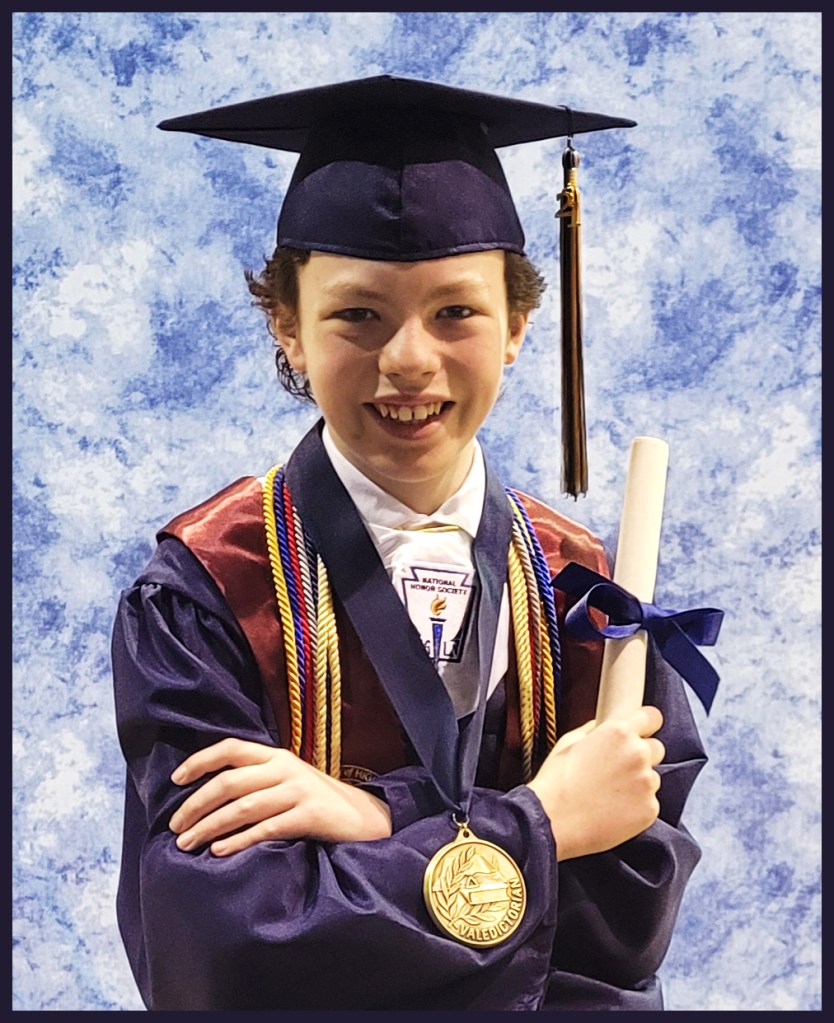 SALISBURY — When Melissa and Mark Wimmer placed their son, Mike, in junior preschool camp to socialize with other kids, they were not expecting to get a call asking them if they knew the 3-year-old could write his name and knew multiplication tables.

The parents asked, “Was he supposed to be able to do that?” The answer was, “No.”

Another sign that Mike was different than most children was when he went through standard disability testing when starting school. He was identified as a profoundly gifted student with intelligence in the 99.9 percentile.

Mike skipped a few grades in elementary and middle school. This year, he realized remote learning options would let him jump ahead even faster. He is about to finish his junior and senior years of high school as valedictorian as well as an associates degree program at Rowan-Cabarrus Community College. That work happened in just about one year, and he’s only 12 years old.

Mike is now a Davidson Young Scholar, the subject of news articles by outlets across the country and has startups and job offers in the United States and abroad.

At 12, Mike can not legally work a 9-to-5 job and his parents manage his businesses, but he can do contract work. Mike’s goal, and a tagline repeated on his website, is to build technology that enables people to live better lives.

He is interested in robotics and software development. His project Reflect Social has the goal of combining social media with the “Internet of Things,” a term used to describe connected devices. He is looking to start beta testing HORIZON OS, an operating system that will serve as the backend for Reflect.

Moving through school so quickly while working on his other projects, Mike said, he has not had to give up on being a kid. He spends about four or five hours on school every day. He does not spend much time on studying because he retains information nearly instantly. When he finishes with class work, Mike has time to work on his projects or other normal things you would expect from a kid.

Mike is a student at Concord Academy, a private Christian school in Concord. There, Mike and Melissa said, Mike found a school that let him move at his pace. He said the teachers are supportive of him.

“We never pushed him academically,” Melissa. “If he showed interest in something, we would try to get him exposure to whatever he was interested in.”

Mike said his social circle is a mix of kids his age, high school friends and adult colleagues. He likes basketball, swimming and playing racing simulations with his friends. He is a fan of exotic car endurance races and collects die-cast exotic car models.

“I’m a normal kid and just happens to be able to do things that adults are able to do,” Mike said, adding everything he is working on is just him being himself and he does not consider it work.

Mike said he is having the time of his life at this point and weighing his options for what is next. When he does go on to pursue more degrees, he plans to move quickly through those programs as well.

If you want to learn more about Mike and keep up with his projects, he has websites for both of his start ups: nexterainnovations.com and reflect.social.

Cheerwine Festival will stick to Main Street, stay away…