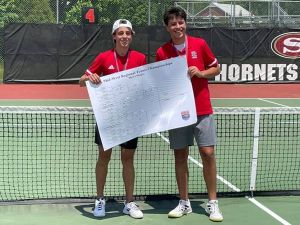 Will Koontz and Joey Caraccio

SALISBURY — The singles championship in the 2A Midwest Regional Tennis Tournament on Saturday came down to South Rowan juniorJoey Caraccio and Salisbury junior Will Koontz.

This was their third meeting this season. Caraccio won in the Central Carolina Conference regular season in a match at South. Koontz won in the CCC Tournament.

Both advance to the state tournament in Cary.