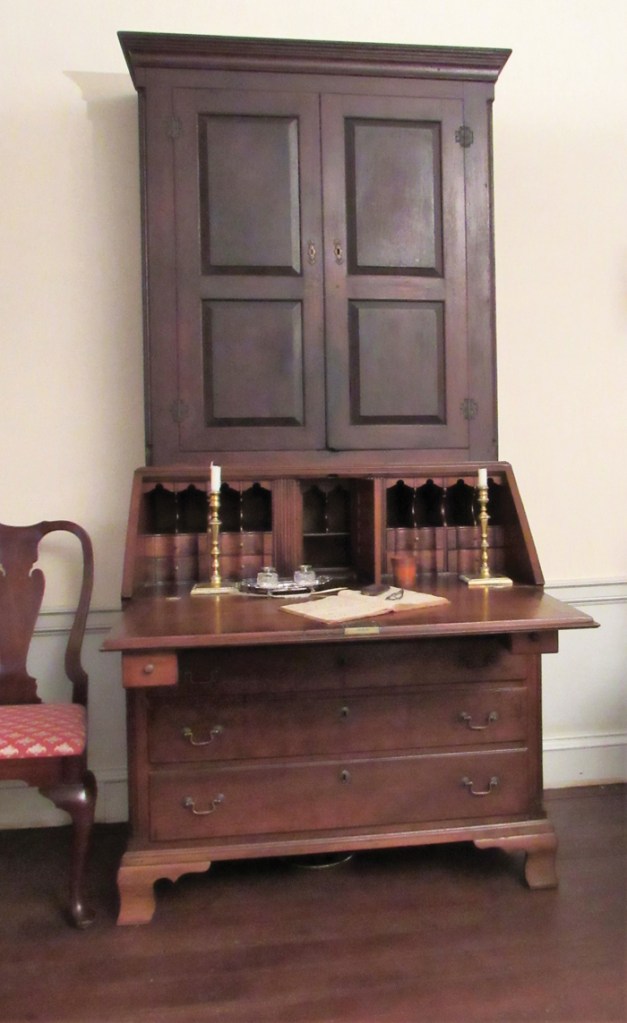 This later 18th century desk and bookcase by master cabinetmaker James Gheen is in the front room of the Utzman-Chambers House on South Jackson Street. Submitted photo

In May 1973, when President Richard Nixon signed a Congressional resolution proclaiming America’s first National Preservation Week, he urged Americans to respect the past: “As the pace of change accelerates around us, Americans more than ever before need a lively awareness of our roots and origins.” In May 2021, Historic Salisbury Foundation celebrates what is now National Preservation Month by highlighting early Rowan County cabinetmakers. Their work was an important part of Salisbury and Rowan County’s “roots and origins.”

In the late 18th and early 19th century, Rowan County was home to over 30 essential trades. Most produced “necessities” such as clothing, textiles, shoes and harnesses. A smaller number made chairs, wheels, wheeled vehicles, bowls, plates, coffins, spinning wheels and built houses. At the top of the woodworking hierarchy were the cabinetmakers, the skilled craftsmen who produced “luxury items” such as desks, tables, secretary bookcases, chests of drawers, sideboards, cupboards, washstands and bedsteads.

In 1770, Rowan County was practically bereft of luxury items. There were only two cabinetmakers and one chairmaker in what was then North Carolina’s largest county. In pre-Revolutionary War Rowan County, pioneers were accustomed to making their own rudimentary furniture, farm implements, looms, spinning wheels and cabins. Because of the low demand for luxury goods in the North Carolina backcountry, Rowan’s cabinetmakers worked part time at their trade and part time as farmers.

Toward the end of the 1770s, Rowan County’s most notable cabinet maker arrived here from Pennsylvania. “James Gheen (circa 1740-1796) was undoubtedly the most influential cabinetmaker in Piedmont, North Carolina,” said antiques dealer Robert Pearl. Gheen built furniture at his farm on Second Creek, in northwest Rowan County, and sold it in Salisbury. Especially popular were Gheen’s fall front desks with bookcase tops. The Rowan Museum has two Gheen desks — one with a mismatched top donated by Dan Nicholas in 1954 and the other purchased at auction in 2008 for $10,000. Both help furnish the museum’s Utzman-Chambers House on South Jackson Street.

In October 2020, an even more elegant Gheen desk with a correct bookcase top sold at Brunk Auctions in Asheville for $44,280. This Gheen piece was extensively inlaid with lines, bellflowers and a stylized tree. The center prospect door was topped with a New England-style scallop shell carving. Interior drawers were serpentine like the Nicholas-donated desk. The bookcase was topped with a scrolled pediment and carved rosettes. Rowan Museum was an underbidder on the rare Gheen desk bookcase.

James Gheen may have been the most influential 18th century Rowan County cabinetmaker, but he was not alone in creating well-designed German-influenced cabinetwork. Johannes Stirewalt (1732-1796), who lived in southern Rowan County, was Gheen’s contemporary. Historians know that he built the pipe organ at Organ Lutheran Church and Rowan Museum attributes their 7½-foot by 4½- foot corner cupboard to him. The Stirewalt cupboard escaped extinction several times in its long life and miraculously survives. It was rescued from a house that was demolished only to be left outdoors for years. Its bottom half was bleached either by the sun or lye.

“Lewis Utzman was from the Bringle Ferry Road German settlement near Union Lutheran Church,” said Rowan Museum Executive Director Aaron Kepley. “Unfortunately, we do not own any of his pieces and I have not found any online.” In 1814, Utzman bought the land where the Utzman-Chambers House was built circa 1815. The Panic of 1819 was especially hard on cabinetmakers and by the end of the 1820s, Utzman had to sell his tools and milk cows to satisfy creditors. He moved to Tennessee for a fresh start.

Lewis Utzman and other Rowan County cabinetmakers advertised their products in local and area newspapers saying that they would sell their wares for cash, produce, planks, timber and scantling (cut-pieces of lumber). They also used the newspapers to solicit or announce the hiring of apprentices, some as young as 7 years old.

Gheen, Stierwalt and Utzman were German immigrants who were influenced by the styles of their homeland as well as by period Pennsylvania, British and Southern designs. They were some of our earliest celebrities and merit a glass of beer hoisted in their honor every National Preservation Month.