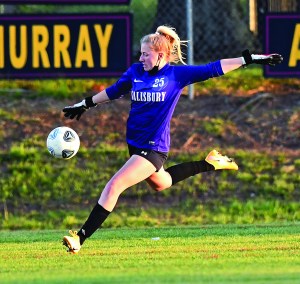 HUNTERSVILLE — The season ended for Salisbury’s girls on Friday with a 3-1 loss to Lake Norman Charter in the third round of the 2A state playoffs.

Lake Norman Charter (17-0) has been the West representative in the last two state championship games.

UNC commit Asha Means scored twice for the Knights, who will be moving up to 3A in the fall.

“I honestly cannot say enough about these girls,” Salisbury coach Matt Parrish said. “I cannot come up with any other occasion where the cliche ‘leave it all on the field’ rings more truly. We gave them all we had tonight. I’m proud to be their coach. I’m proud of the name on the front of their jerseys. I’m proud of all that that team has become.”

Asha Means took a pass from Eliza Rich inside the 18-yard box and beat Salisbury keeper Hannah Schmeltzer eight minutes into the match for a 1-0 LNC lead.

Salisbury leveled the match less than 10 minutes later when Lillie Rusher sent a free kick into the box from around midfield. After a minor deflection, Caroline Cardelle found the ball at her feet and deposited it into the net.

Rich buried a free kick from 22 yards out to give LNC a 2-1 halftime lead.

Means struck again in the second half, carrying the ball from midfield and through traffic to give Lake Norman Charter the final margin.

“Schmeltzer was outstanding, making 21 saves,” Parrish said. “Outside backs Madelyn Lawrence and Stella Koontz played their best matches of the season. Brown was superb. Muire and Sutton Webb worked tirelessly in the midfield to slow the attack of LNC and provide the opportunities we had. Lake Norman Charter is the real deal. They are a more complete team than they have been in the recent past, which is saying something because they have been at the top of 2A for quite some time. I think we frustrated them for large portions of the match which says a lot about my work rate of my girls.”