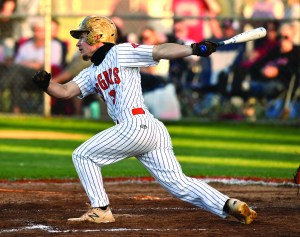 GRANITE QUARRY — Chris Cauble logged his 250th win as Carson’s head baseball coach on Thursday, but No. 251 was even bigger.

It was a thrilling game that saw both starting pitchers — East’s Jake Hunter and Carson’s Dylan Driver — reach the pitch limit in the seventh inning.

East (2-1, 0-1) jumped ahead in the bottom of the first, with Cobb Hightower, Austin Fulk and Aiden Schenck greeting Driver with consecutive singles. Driver, who is headed to Catawba, limited the damage to one run, settled in and the Cougars came back.

Carson (3-1, 2-0) tied the game in the second with the help of an error and hits by Cameron Burleyson and Hayden Simmerson.

Carson took a 2-1 lead in the third. When Emory Taylor and Driver took off on a double steal with two outs, the throw got away, and Taylor scored.

In the fifth, Driver singled home Taylor, and CP Pyle scored on an error for a 4-1 Carson lead.

East made a charge in the sixth. Schenck singled and Hunter walked to start the inning and a wild pitch put Mustangs at second and third. Driver struck out the next two before a walk to Tate Green filled the bases. Chance Mako drove a run home with an infield hit that was lined back at Driver. Then Cameron Padgett singled sharply on the ground to center field. His hit scored a run, but Pyle threw out what would have been the tying run at the plate. Burleyson made the tag.

Carson took a 4-3 lead to the seventh. Pyle and Driver had hits. Hunter reached the legal pitch limit (105) during an at-bat by Jake Harris, but the rule allows a pitcher to finish working to a batter if he reaches the limit during the course of an at-bat. Hunter got Harris to ground out on his 107th pitch, but both runners moved up.

Driver also reached the pitch limit. His 105th pitched produced a groundball off the bat of Hightower for the first out of the seventh. Mason Duren relieved Driver, who went to right field.

Duren got the second out on a liner to Pyle, but Schenck doubled to keep the inning alive. Hunter then flew out to Driver to end the game.

The Mustangs had eight hits, with Schenck getting three and Hightower two.

Carson also had eight hits, with Taylor and Driver getting two each.

East plays again on Saturday, traveling to West Rowan for a 7 p.m. contest.