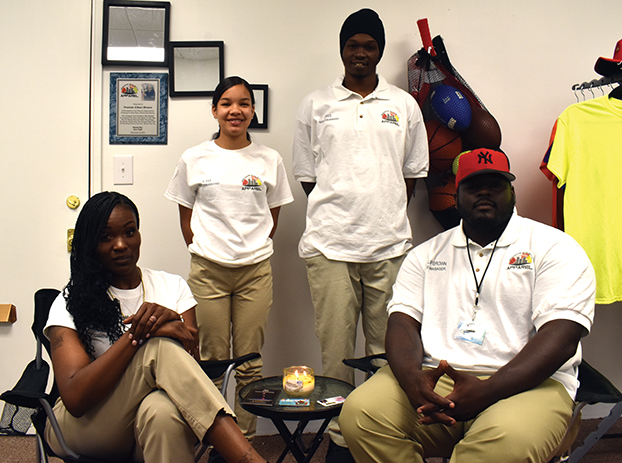 SALISBURY — After launching Browns Athletic Apparel in Miami a decade ago, Tranise Brown opened the company’s second retail location in Salisbury in February.

Brown’s business was born out of necessity, when she was unable to find employment due to her criminal record.

While living and going to high school in Miami, Brown became pregnant at the age of 16. She decided to leave high school to attend the Miami Job Corps program, where she finished her education while working toward becoming a certified nurse educator. Brown worked in the medical field for several years before she was charged with employee theft.

Once she was a convicted felon, Brown said it was almost impossible to find gainful employment. Tired of hearing “no” from employers, she decided to go into business for herself.

“I knew I had to work for myself,” Brown said. “I didn’t want to work for anybody else anyway.”

Brown decided to launch a business that she was familiar with — screen printing. As a 13 year old, Brown got her first job at D&N Sports, a screen printing shop in Miami. Years later, Brown took what she learned from her time there and applied it to her own business.

Brown said she began to grow Browns Athletic Apparel out of a small office and soon found success designing and printing youth sports uniforms. Eventually, Brown said she began outsourcing the shirt manufacturing process to a small factory in Pakistan.

Over time, Brown said, her company began to expand its customer base outside of south Florida. Browns Athletics Apparel now ships shirts, uniforms and other printed merchandise to several states across the country, including New York, Ohio, Nebraska. The company, she said, even has a few clients in Canada in the Bahamas.

“It’s a great feeling in general to see people wearing my stuff that are from out of town,” Brown said. “The out-of-towners mean a lot because I wonder how they found me and they continue to support Browns Athletic Apparel.”

Brown decided to open a second location in Salisbury because many of her family members live in the area. Her brother, Phillip, has been operating a satellite Browns Athletic Apparel business largely from his home. As a result, the company already had several clients in the area when it opened its doors earlier this year.

The Salisbury shop is staffed by Brown, her brother, who serves as the sales manager, and two production team members. Between the Salisbury and Miami locations and the factory in Pakistan, Brown said she oversees a staff of over 20 employees.

“It takes a team to run a printing company,” Brown said.

Brown now splits her time between the Salisbury and Miami locations, flying out of the Concord-Padgett Regional Airport on an almost weekly basis. Although Brown only recently opened a second location in Salisbury, she said she doesn’t want to stop there.

“I want to be like a Dick’s Sporting Goods, but Browns Athletic Apparel,” Brown said. “I want to stand alone and offer everything, which we do now, but I want it in stores where you walk through the door and have your sporting goods section, you have the football, you have the soccer, you have the basketball, like that.”