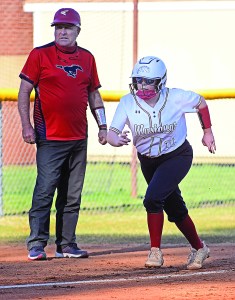 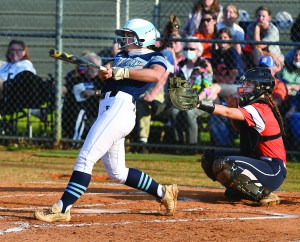 TROY — Haley Strange struck out 16 and pitched a two-hitter to lead 15th-seeded East Rowan to an 8-0 win at No. 7 Montgomery Central on Wednesday in the second round of the 3A softball playoffs

“It was a good performance,” East coach Todd McNeely said. “Timely hits tonight up and down the lineup, and Haley pitched great.”

Schroeder’s triple was the biggest blow.

East (9-4) scored twice in the first inning and kept adding on until blowing the game open with a four-run seventh.

East will be playing Carson, Marvin Ridge or Alexander Central in the third round.

MONROE — Taylor Walton pitched a one-hitter and struck out four as 16th-seeded West Rowan rolled to a 6-0 win at No. 8 Piedmont in the second round of the 3A softball playoffs.

Madelyn VonCanon was hit by a pitch with the bases loaded for the Falcons’ first run, and Megyn Spicer singled home a run.

Brooke Kennerly led off the third with a solo homer for a 3-0 lead. Caylie Keller had a run-scoring hit to make it 4-0.

Walton hit a two-run homer to finish the scoring for the Falcons (12-2).

Kenadi Sproul and Spicer had two hits each.

CHINA GROVE — Carson is still trying to play its first-round game in the 3A playoffs.

The Cougars were rained out Monday and Tuesday.

They had just gotten started on Wednesday against Marvin Ridge when the rains came again.

The game will be resumed in the bottom of the first on Thursday at 4:30 p.m. with Burns on third base with two outs. Makayla Johnson will be batting.