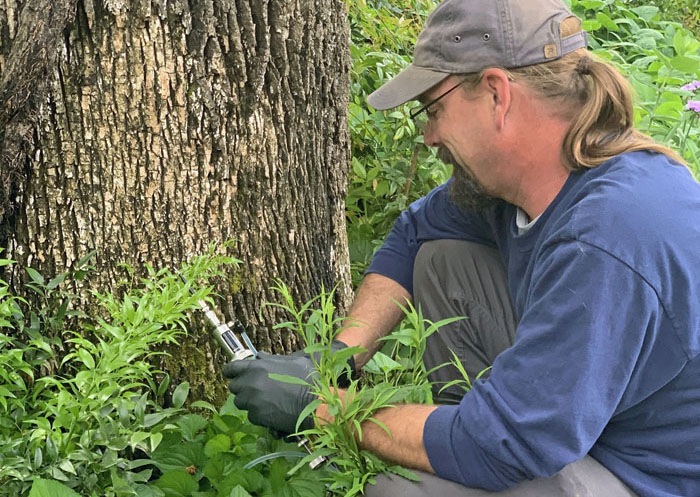 SALISBURY — Humans aren’t the only species receiving preventative shots during the pandemic.

This week, city officials are using a statewide grant to inject 20 local ash trees with an insecticide meant to protect them against the invasive emerald ash borer beetle.

In 2018, the city received a grant from the North Carolina Forest Service’s Ash Protection Program and the state Department of Agriculture and Consumer Services to protect ash trees against the insect. The city reapplied for the same grant and has been awarded $7,491 to treat 20 local ash trees across its more than 300 acres of park space.

The emerald ash borer beetle is native to northeastern Asia. Salisbury arborist Stephen Brown said they’re an invasive species introduced to North America in the 1990s. The insects have since destroyed thousands of acres of ash trees in northern states like Michigan. Like its name, the beetle is green in color and measures about a quarter of an inch.

The insects feed on the inner bark by making a “D-shaped” hole near the top of the tree, disrupting the tree’s ability to transport water and nutrients. Emerald ash borers are capable of destroying ash trees within two to three years.

The city contracted Bryan Fisher of Charlotte-based Arborguard to use the insecticide this week to protect 20 of the city’s largest ash trees across Hurley Park, Kelsey Scott Park, Forest Hills Park and Chestnut Hill Cemetery. Brown said his predecessor, former city arborist Mark Martin, surveyed ash trees around the city in 2018, and the clusters of trees currently receiving the treatment were chosen due to their proximity to the greenway.

The spray is applied systematically via an injection system into the tree’s vascular system. Brown said the tree absorbs the insecticide and transports it throughout the tree, cutting off the supply of water and nutrient where the insects feed under the bark.

After measuring the tree’s diameter at about chest height, Fisher is able to use a calculation to determine how many sites on the tree will receive the treatment. Holes are then drilled into the tree, adapters are placed and the insecticide is injected.

Injecting the insecticide via the tree’s vascular system, Brown said, prevents chemicals from splashing onto the ground or drifting into the air and potentially harming animals or other plants.

Though this week’s injections are preventative measures, Brown said last year the county discovered an ash tree in Cleveland had been infested with the emerald ash borer, noting its threat in Rowan County.

Brown said the injection method is often used against other insects in other trees. For example, a similar procedure could be followed for protection against pine borer insects, which can destroy pine trees.

“As far as taking care of our trees in North Carolina … you look around and it just adds to the beauty of our county, our city and our state,” Brown said. “So to lose our trees, eventually it will affect us. It’s just a natural resource that we just can’t do without.”