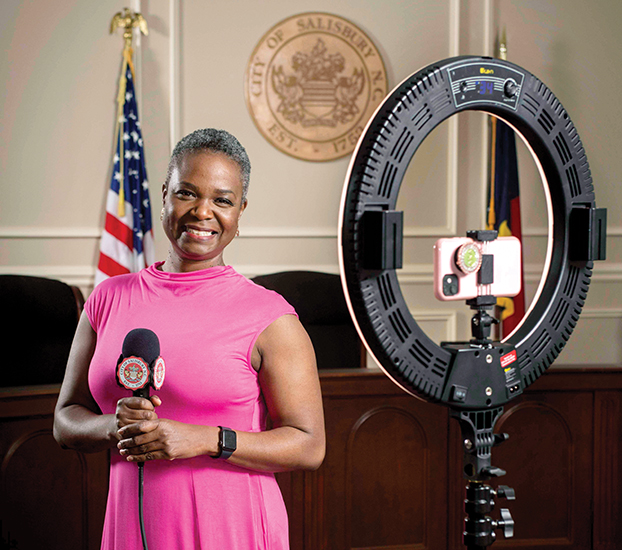 Linda McElroy poses in the Council Chambers at Salisbury City Hall with her tools of the trade. A microphone, a cellphone and a ring light. McElroy is the Director of Communications for the City of Salisbury. Salisbury NC 1/19/21 JON C LAKEY/FOR THE SALISBURY THE MAGAZINE.

“The Chris Coulson Award is an incredible honor for North Carolina government communicators, and I am so humbled to receive this recognition,” said McElroy. “Five years ago when I came to Salisbury, I fell in love with the city. It has been a rewarding experience working with residents, city staff and the Salisbury communications team. I would like to thank NC3C, the Salisbury communications team and our city manager for their guidance, support and encouragement.”

McElroy has a bachelor’s degree from Slippery Rock University of Pennsylvania and a master’s degree from Strayer University. She is a 2020 graduate of the municipal and county administration courses of the School of Government sponsored by the University of North Carolina at Chapel Hill. She also is a graduate of the advanced public information officer course hosted by the Federal Emergency Management Agency.

“Linda is a perfect example of someone whose character, career and service makes her an excellent recipient for the Chris Coulson Communicator of the Year Award,” said City Manager Lane Bailey. “Since being a member of Team Salisbury, Linda has built up the communications department and implemented great things such as the council preview videos, citizen’s newsletter, internal videos to communicate to staff and the rumor control page. She is incredibly driven and immensely talented, and we are a better organization because of her contributions. I am happy to see Linda receiving this award as it is so well deserved.”

Each year, NC3C has the opportunity to recognize a member whose character, career and service represent the highest standards of the profession. The Communicator of the Year is someone who excels in the practice of local government communications and/or has accomplished an outstanding one-time achievement.

“Linda’s professional success and reputation certainly merit this award. She has been a member of NC3C for several years and members like her make NC3C the success it is,” said NC3C President Joshua Harris.

Locals condemn use of force during 2019 traffic stop…