KANNAPOLIS — Standing with his back toward the outfield, gesturing up at the cloudy and brightening sky, a smile spread across Andy Sandler’s face.

“It had to be this way,” Sandler said. “Nothing has been easy getting here.”

Sandler, the owner of the Kannapolis Cannon Ballers, was referring to the rainy weather, which looked for some time Tuesday like it might dampen the Minor League team’s long-awaited debut.

While rain poured for most of Tuesday afternoon, the weather broke and the sun peeked out from gray clouds around 6:15 p.m., just before Sandler, Kannapolis city officials and U.S. Rep. Richard Hudson addressed the crowd during a pregame ceremony that concluded with the firing of a cannon and a flyover.

Sandler said Jerry Reinsdorf, the owner of the Chicago White Sox, with whom the Cannon Ballers are a single-A affiliate, was planning to fly in on Tuesday to attend the game. However, stormy weather in the Midwest forced him to cancel his flight at the last minute.

After the pregame festivities concluded, Cannon Ballers starting pitcher Andrew Dalquist threw a strike to start the game against the Down East Wood Ducks and kick off the team’s 60-game season.

For many fans, the wait to see Minor League Baseball played in Kannapolis has been long. For Sandler, it’s been even longer.

An entrepreneur and lawyer who lives in Washington, D.C., Sandler first got the itch to own a Minor League team when he was watching a Washington Nationals game with his sons in 2018.

“We were looking at all of this construction, all of this building around a part of Washington that was very run down,” Sandler said. “I turned to my boys and I said ‘Wouldn’t this be great to go do this in a smaller city somewhere?’”

Two weeks after that conversation, Sandler said he was presented with the opportunity to buy the then-Kannapolis Intimidators.

“It was a city rebuild where we would be a development partner and do all that,” Sandler said. “It was exactly what we were looking to do.”

Sandler bought the Kannapolis team, began the rebranding process and started planning for the $52 million ballpark that now serves as an anchor for the city’s downtown.

The stadium was built and the team was poised to play its inaugural season last spring when the COVID-19 pandemic halted those plans. Instead, the Cannon Ballers kicked off their season on Tuesday night, more than 600 days since Minor League Baseball was last played in the city. The game was the first of six home games in six days the Cannon Ballers will play against the Wood Ducks.

“Baseball is back in Kannapolis,” Hudson said during the ceremony, eliciting a cheer from the crowd. “Thanks to Atrium Health Ballpark, it’s better than ever before.” 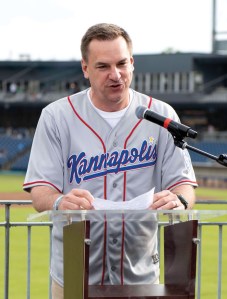 US Congressman Richard Hudson dressed out in his Cannon Ballers jersey makes comments before the game. JON C LAKEY/FOR THE SALISBURY POST. 5/4/21, Kannapolis,NC.

In the year since the Cannon Ballers were scheduled to play their first season at the park, downtown has grown exponentially. Restaurants, boutiques, eateries and apartments are now only a quick walk across West Avenue.

That’s exactly what Kannapolis Mayor Darrell Hinnant and city officials envisioned when they started the downtown revitalization project centered around the ballpark several years ago. Hinnant and other members of the city’s staff and council who attended the game Tuesday wore specially made Cannon Baller jerseys with the No. 20 on them, which they’d been presented with by the team earlier in the day.

“We’re not just opening a baseball park. We are reimagining and revitalizing a city,” Hinnant said.

David Deal, owner of Sabor Latin Street Grill, said the ballpark was one of the main factors that led him to opening a location at 203 West Ave. in downtown Kannapolis, his home town.

Although Tuesday night was the first time Minor League Baseball was played at the park, it wasn’t the first game the ballpark has hosted this spring. Four college and high school games have been played there, each of which brought thousands of potential customers downtown.

“As far as business goes, there’s an amazing amount of foot traffic that is drawn here through the park area and ball field,” Deal said. “We just opened up in February, so it’ll be our first experience with it, but even with the college games and local games going on, you can definitely see an influx of people.”

One of the thousands who came downtown to watch the game on Tuesday night was Aaron Trusky, who lives about 30 minutes away in Midland.

“I’m just excited to be back at the ballpark,” Trusky said, while holding a bag of Cannon Ballers merchandise. “It’s been a while, obviously, with everything that’s been going on.”

Trusky said he attended several Kannapolis Intimidators games, but decided to go all in and buy season tickets for the Cannon Ballers because he was drawn to the stadium and the chance to watch baseball again.

“We used to go out to the old ballpark, but this place is just amazing,” Trusky said. “It’s incredible.”

He said plans on bringing his family back for as many games as they can attend.

Many Kannapolis residents have utilized Atrium Health Ballpark over the past year as a place to exercise, grab a meal or eat a meal. Sandler said he was proud of the fact that over 150,000 people visited the ballpark before a game was even played there.

On Tuesday night, 2,487 fans were in the ballpark to watch the home team play for the first time. They were treated to celebratory fireworks after the game concluded.