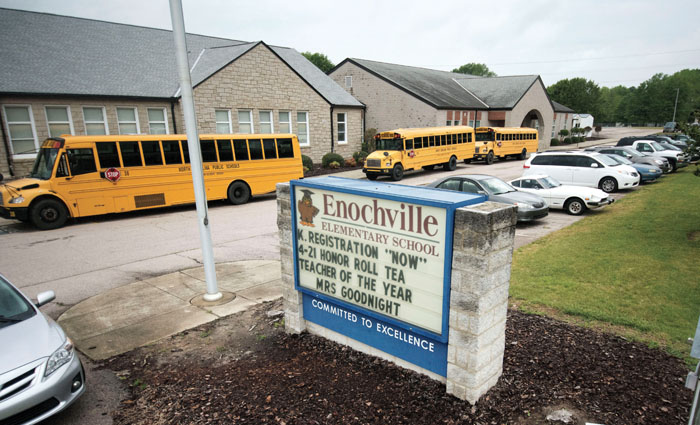 The county’s parks master plan in 2016 gave the Rowan County Board of Commissioners a suggestion it may be able to take action on this year.

The parks plan suggested creating a facility in southern Rowan County — somewhere between the now-vacant Kannapolis Intimidators Stadium and Gold Hill. It recommended finding a suitable site within five years and developing the site in five to 10 years.

While it’s not in the search area specified in the plan, commissioners may have an answer for a southern Rowan County park at Enochville Elementary School. Acquiring land in the study area would cost money; using the Enochville property would not. Commissioners could simply follow the model they’re using now in Woodleaf.

In 2017, Woodleaf and Cleveland elementary schools were consolidated into West Rowan Elementary School. The town of Cleveland got the new, consolidated school and a relatively quick effort to redevelop the former school into an EMS station and library. Work to create Woodleaf’s park didn’t move quite as quickly, but county commissioners appear to be moving forward in earnest, setting aside a few hundred thousand dollars and seeking a few hundred thousand more in grant money.

The plan in Woodleaf involves an amphitheater, shelters, gazebo, playground and plenty of green space.

In Enochville, where the elementary school is set to close at the end of the 2020-2021 year, Rowan County commissioners could claim the property after the Rowan-Salisbury School System declares the building to be surplus. Then, they could take their time sorting out the particulars of a park.

Commissioners would need to decide whether Enochville is good enough to meet the goals of the park study and if a facility at the elementary school is too close to ones maintained by Kannapolis or Landis. Off of Mooresville Road, Sloan Park is the nearest county facility.

If a park isn’t worthwhile, the county and community should work to find another good use. Between Woodleaf, Cleveland and Faith, where a charter will take over a public school building, local residents have shown they aren’t content to let old schools languish or turn into vacant fields. That spirit should continue in Enochville.