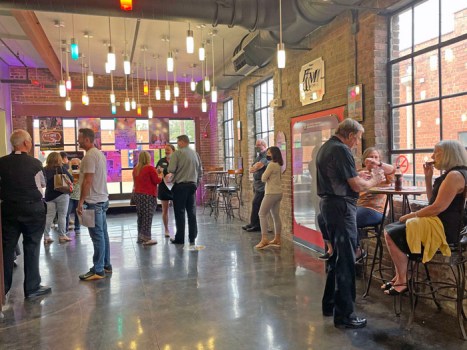 Natalie Anderson/Salisbury Post — Locals sip on drinks and snack on refreshments at Lee Street Theatre as they await a presentation detailing all eight shows that will be featured during Season 14. 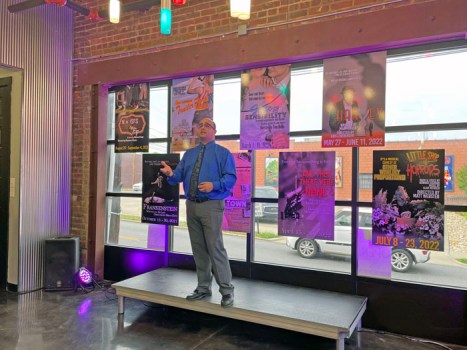 SALISBURY — After a difficult year marked by lockdowns, quarantine and social distancing, Lee Street theatre officials say it’s time to have some fun.

As guests sipped on cold beverages and snacked on refreshments Thursday afternoon at Lee Street theatre, Executive Director Rod Oden reflected on the challenges brought on by COVID-19, and the resiliency in staff to continue putting on shows, even if virtually, during Season 13. On March 7, 2020, Oden said theater officials made the decision to halt in-person shows for the season, just hours before a wave of organizations across the nation came to a standstill.

But the theater immediately jumped into the world of Zoom streaming, and began accepting donations for live-streamed shows. Oden said another attempt at in-person shows was considered in November, but they soon realized much of the public was not yet comfortable attending a show in-person.

“The board rode the wave with me,” Oden said. “It was just this constant ride of the year.”

But fast-forward to April of this year, and the theater returned to the main stage with an extended run of “Clue” throughout the month o. Oden said the success of that show signaled the local community’s readiness for in-person performing arts.

Oden said the current capacity for audiences is 100, but that could increase as more COVID-19 restrictions are lifted. Audience members will be required to wear a face mask or cloth face covering, while each actor will be protected by a clear face shield on stage.

Oden praised the collaborative work of Lee Street theatre and Piedmont Players in raising $37,000 for operational support for both organizations for the Theatre Salisbury effort.

To end Season 13, Lee Street theatre will show “The Complete Works of William Shakespeare” featuring an all-female cast throughout May, beginning May 14. The original musical version of “Grease,” being performed from July 2-18, will formally end the current season.

But Simmon Moray of Statesville, who is directing the musical and has been involved in the show in various roles multiple times, is bringing a fun twist to the show by designing the theater for a drive-in movie experience.

“Even though some people are like, ‘Grease, again?’ I just find the joy and happiness and the thrill of ‘Grease,’ ” Moray said. “And I know everybody that’s coming to see it will have that same shot of adrenaline and excitement that people feel when they hear ‘Summer Loving,’ and ‘We Go Together.’ That’s the type of energy people really need right now.”

Season 14 kicks off with “Noises Off,” a farce written by Michael Frayn and directed by Matthew Monte, from Aug. 20 to Sept. 4. The comedy is about putting on a show that’s guaranteed to keep you “dying laughing,” Oden said.

A truthful and honest adaptation of the novel “Frankenstein” is up next from Oct. 15 to Oct. 30, and is written by Bo List and directed by Brian Daye.

“What I really love is how (Bo List) turns the traditional model of Victor and of a creature on end,” Oden said.

From Nov. 19 to Dec. 4, locals can catch “The Great American Trailer Park Musical,” a comedy that’s “more fun than a chair-throwing episode of Jerry Springer.” The play features Pippi, a stripper on the run, and her arrival to Armadillo Acres — Florida’s most exclusive trailer park. The play is based on a book by Betsy Kelso, and features music and lyrics by David Nehls. It’s being directed by Joey Moray, who said it’s full of drama, loaded guns and comedy. The music direction is led by Laurie Klaus.

“It is every bit as bad as you’d think it is,” Oden said. “The main character is an agoraphobic female who doesn’t want to leave her trailer with her husband that works all the time. It’s led by a Greek chorus of three middle-aged women who sit on their lawn chairs, drinking beer, telling you how it is.”

Kicking off the new year is an adaptation of Thornton Wilder’s “Our Town,” a minimalistic set directed by Claudia Galup. The show will be performed from Jan. 21 to Feb. 5. Oden said the show is being internalized to reflect a blast of Salisbury’s past.

From March 4-19, 2022, the theater will have an original and different adaptation of “Sense & Sensibility,” based on the novel by Jane Austen. It’s being directed by Tom Hollis, while Andy Rassler is writing the script.

Locals are expected to stay on the edge of their seats with the adaptation of “And Then There Were None,” a famous murder mystery story written by Agatha Christie where 10 strangers are summoned to a remote island and begin dying off one-by-one. The play is being directed by Melissa Tarduno, a Catawba College alumna, and will be featured from April 15 to April 30 next year.

The heartwarming and endearing classic story, “Harvey,” will be performed from May 27 to June 11 in 2022. The story is written by Mary Chase, while the director is Kris Lineberger.

Oden said “Harvey” is a performance that compels all humans to question what they believe when asked to believe.

Finally, ending Season 14 is “Little Shop of Horrors” from July 8 to July 23 in 2022, a horror, sci-fi thriller musical. The performance is based on the book and lyrics by Howard Ashman, with Alan Menken leading music and Matt Webster directing.

Following the presentation of all shows, Oden arranged a surprise musical performance of “Suddenly Seymour” from one of his favorite shows, “Little Shop of Horrors,” by Bailey Lambert and Tommy Foster Bradley.

Joey and Simmon Moray told the Post they began their time with Lee Street theatre during the 2019-2020 season when Joey filled a needed role in “9 to 5,” which was featured last October. Both Joey and Simmon praised Lee Street Theatre for “raising the bar for community theater,” and for Salisbury having two local theaters. Both credited the theater for being “really inventive” to keep the arts alive throughout the pandemic.

“It’s a blessing to be able to do these shows now,” Joey said.

“We’re craving being in a room with other people,” Simmon added.

For more information on upcoming shows and Season 14, visit leestreet.org.