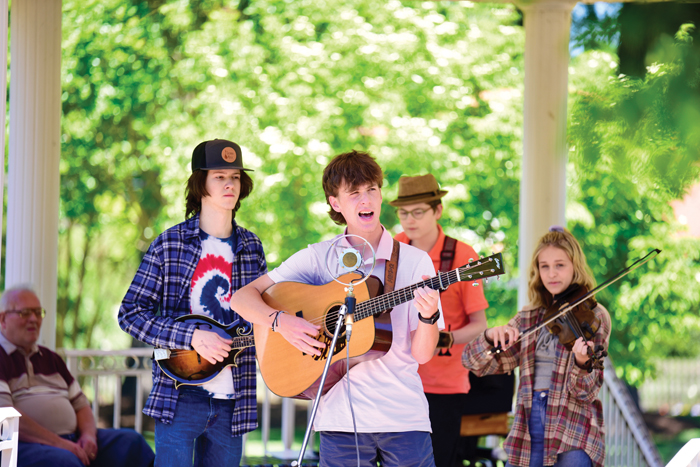 Carl Blankenship/Salisbury Post - Gabe Bemus sings with One Fret Over. The band, made up of two sibling pairs, performed for the town's Christmas drive-in last year.

SPENCER — Spencer celebrated spring on Saturday with a pair of events to help residents enjoy some time outside and spruce up their homes.

The town hosted a concert at the Library Park, titled “Celebrate the Soul of America” and featuring local talent. Librarian Beverly McCraw said she had a few weeks to plan the event after she received the go-ahead. McCraw said she enjoys planning an event for the spring.

There were some familiar faces performing on Saturday. McCraw said she pulled from talent the town has used in the past to create full schedule on short notice. 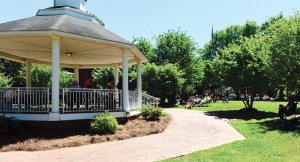 Carl Blankenship/Salisbury Post – The weather cooperated on Saturday afternoon. People brought their own chairs to sit outside and enjoy the show.

One Fret Over, a group of young bluegrass musicians, were the opening act for the day. The group performed at the town’s drive-in Christmas celebration last year and were originally slated before the pandemic to play in Spencer during an event last spring.

Singer Mia Mason made an appearance as the program’s finale. Mason, a Salisbury High School student, studies with local musician Destiny Stone. Mason sang at a library event more than a year ago, before the pandemic. This was her first time back performing in Spencer.

Mason said her singing has progressed in the previous year, and she is starting to perform again as restrictions are lifted.

Pat Sledge, a Spencer town board member, came out to enjoy the performances. Sledge said it is a relief to see events start to pick up again.

“About the only things that I’ve done, for the most part, for the last year-and-a-half is come to the town council meetings,” Sledge said.

Sledge and the town board have been missing community involvement.

The Hotdog Shack and Pelican’s Snoballs both came out to serve food to attendees.

The town on Saturday also held its annual mulch give away, which was also canceled last year. The town offered pick up on Saturday morning for free from its Sowers Ferry Road facility and offered delivery service for a $10 fee.

Salisbury headed to state championship after knocking off North…