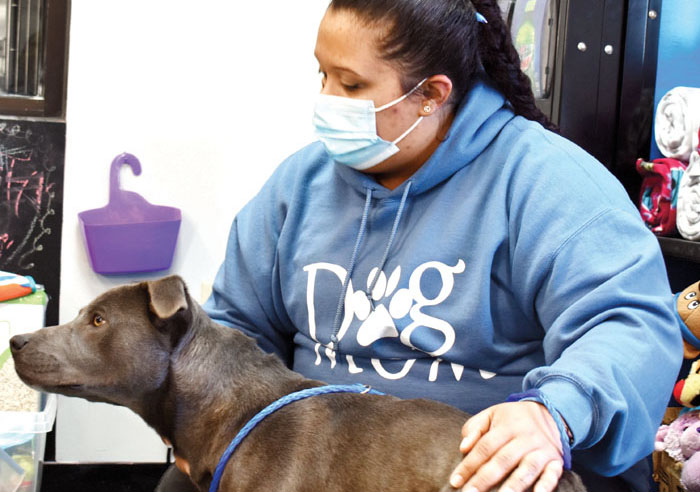 SALISBURY — COVID-19 is a human disease, but local animals have not been immune to the effects of the pandemic.

There was a slight uptick in people surrendering their pets when restrictions were put in place in March 2020, but that issue leveled off and the others never materialized, she said. Pannell attributed the small jump in surrenders to cases where people were not able to take care of their pets due to the pandemic. Some foster cases turned into adoptions at that point as well.

“If you can’t accommodate your animal because of the situation, we considered that an emergency sort of scenario,” Pannell said.

County Animal Services Director Bob Pendergrass said the previous year has been a success for keeping up with adoption needs because of special adoption fee events and thanks to locals fostering animals.

“We had a lot of apprehension in the beginning about what to expect, to be honest,” Pendergrass said.

The shelter expected it may have trouble getting animals into new homes as well, but as adoption rates dropped, intake did too.

Pannell said the spring and summer months are kitten and puppy season when adoptions normally pick up and stay steady until around November. She said the shelter was able to lower its intake to better match the lower adoption rate by asking people surrendering pets to keep them a bit longer.

“We’ve really seen our intake drop because people are willing to work with us to make sure their pet is safe,” Pannell said.

The pandemic has also affected the day-to-day operation at the shelter. It moved to an appointment-only model and has stuck with it for the past year.

Pannell said the continued stability at the shelter has been a relief, and the facility has been able to continue its streak of not euthanizing animals unnecessarily.

For Rowan Wild, a county-funded captive wildlife program based out of Dan Nicholas Park, the pandemic has come with some adjustments as well.

A year ago, the program staff was split down the middle. One team worked half the week and the rest worked the other half.

“That way it kind of minimizes if we were to have a positive among our team staff,” animal care specialist Megan Cline said.

A staff-wide outbreak would compromise Rowan Wild’s ability to care for the animals. Cline said the previous year has been a challenge, but the teams have kept going without a hitch.

“If we were to have a positive amongst our team staff or somebody was to be exposed, then it wouldn’t potentially take out the entire animal staff,” Cline said.

The program cares for dozens of wild species including alligators, birds of prey, some domestic animals and a few species not found in Rowan County. It is responsible for two at-risk species: the threatened hellbender salamander and critically endangered red wolves.

“Working in this industry with animal care, those are live animals that depend on their caregivers every day,” Cline said. “It doesn’t matter if it’s sunny outside, if it’s raining outside, if it’s COVID, if it’s Christmas, if it’s Thanksgiving. There’s somebody always here feeding the animals. They depend on us.”

The program has the benefit of being backed by the county, but some private facilities have suffered during the pandemic. Cline said Rowan Wild has rehomed birds from collections that closed.

Uncertainty about how the virus spreads in the early days of the pandemic lead to concern as well. The Centers for Disease Control and Prevention has reported cases of animals, specifically dogs and cats, being infected with COVID-19 by human handlers, but it is unlikely for animals to spread the disease to humans.

There have been no cases identified in animals housed at Rowan Wild or the shelter.

Roger Sweeney, animal management and welfare director at North Carolina Zoo, said there have been COVID-19 infections in animals identified at a handful of zoos throughout the country, though none in the North Carolina facility’s more than 1,800 animals.

Rowan Wild closed completely last March and stayed closed until the end of May, when the outside walkthrough area reopened on weekends only. The facility closed for the season this fall and did not reopen until March. The initial reopening was only for the walkthrough area on weekends, but a few weeks ago the exhibit opened daily. Last weekend, the barnyard area reopened.

Some of the animals are still adjusting to seeing people other than their handlers.

Cline said the nature center, the only part of the park still closed, may reopen in a few weeks.