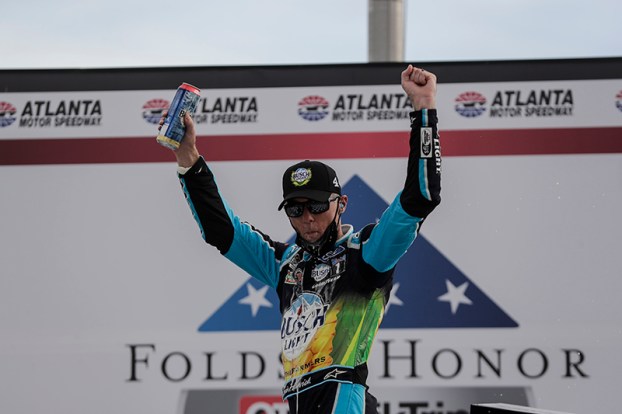 KANSAS CITY, Kan. (AP) — Kevin Harvick learned the importance of survival when you don’t have the best car early in his racing career, whether it was in go-karts as a kid or late models in the long-defunct NASCAR Southwest Tour in the early 1990s.

“My first year in late models,” Harvick said, “I think I only got to run seven races because I wrecked the car every time we went out to the racetrack, and it took us a month to fix it because we couldn’t just go out and buy the parts and put it all together. We had to fix everything. That was something that just became ingrained in my head.”

The moral of the story?

“When you have a 15th-place car and you can finish 10th with it,” Harvick explained, “that’s a victory.”
It’s not as sweet as a real win, though. And heading to Kansas Speedway this weekend, the former NASCAR Cup Series champion has yet to reach victory lane, even though it seems as if just about everybody else has. Brad Keselowski made it nine winners through the first 10 races last weekend at Talladega with an overtime pass for the victory.

It’s the fourth time since the modern era began in 1972 there have been that many different winners through 10 races.

“It’s not a position we haven’t been in before,” said Harvick, whose three Kansas wins are tied for most in history. “It’s a big science project, I can say that for sure. There are a lot of engineers on a lot of computers burning the midnight oil trying to make sure we start making some headway and getting our cars back to where we need them.”

He’s not alone as the series heads to the Heartland.

Denny Hamlin, another three-time winner at Kansas, has eight top-5 finishes in the opening 10 races but has yet to reach victory lane. He’s won two of the last three races at the mile-and-a-half oval just west of downtown Kansas City, including the “spring” race last season that was pushed to late July because of the pandemic.

It’s not that Harvick and Hamlin haven’t been fast; the two have spent most of the season running in the top 5. They just haven’t led the lap that matters the most.

“I mean, there’s frustration, for sure. But it doesn’t change my attitude or work ethic,” Hamlin said after a second-place finish at Richmond a couple weeks ago. “I’m going to work just as hard to win next week and the week after that. You’re a competitor, you want to win. Especially when you have a great opportunity to win.”

Like Harvick and Hamlin, Kyle Busch and Chase Elliott hope to turn their success at Kansas into a long-awaited win.
Busch has more wins (six across all series) in the 20-year history of the track than any other driver, while series champion Elliott won the 2018 playoff race at Kansas and has six top-10s there in 10 career starts.

“Something I tell everybody year after year – whether we’ve had a good year or a bad year – you just never know what the next year is going to bring,” Harvick said. “Last year, everything went our way. This year, it hasn’t really gone our way. Our Busch Light team has really done a great job of scratching and clawing for every position that you can get on the weekend. It’s bought us time week after week to get our cars back to where we want them to be.”

KANSAS CITY, Kan. (AP) — Kyle Busch blew a restart in overtime that should have cost him a race he’d dominated at Kansas Speedway. Given a second chance, Busch corrected his mistake and earned the 61st Truck Series win of his career.

The win Saturday night was the fifth straight for Kyle Busch Motorsports and manufacturer Toyota has won all seven Truck Series races this year. Busch has won twice this year.

Busch won the first two stages and led a race-high 59 of the 140 laps. He got beat by Ross Chastain when the race first went to overtime as Busch struggled to get his Tundra through the gears.

Chastain sailed past Busch and pulled Zane Smith with him as Busch plummeted into traffic. But a spin deeper in the field brought out the caution, set up a restart for a second overtime and gave Busch another chance.

He restarted in the second row behind Chastain and Smith, darted to the top, pulled around to the front of the field and drove to the win by .665-seconds over Chastain. He did his customary bow with the checkered flag to the limited spectators permitted in the grandstands.

Busch, scheduled to race today in the Cup race at Kansas, said he struggled with restarts in the truck.

“No restarts went our way, definitely missed something being able to come up through the gears and get going. It just would not go,” Busch said. “It was just slow. Guys would just swarm us.”

Chastain finished second and said he wasn’t unnerved when the race went to a second overtime. He’d just beaten Busch on the first restart and figured, “let’s do it again.”

He was satisfied with the second-place finish and called it progress for Niece Motorsports.
Austin Hill was third and neither he or Chastain thought they had anything for Busch once Busch got past them on the last restart.

“I thought I did everything right on that restart, thew it on the apron saw Chastain go up to block. From then on it was a drag race,” Hill said. “He held me so tight down in the corner it drug both of us back, I wish he would have side-drafted me and went up and blocked Kyle off of four. That way maybe me and him could’ve battled it out for the win, I don’t know. Kyle might have still crossed us over and won the race.”

Christian Eckes was fourth and followed by John Hunter Nemechek.

Toyota has dominated the season behind KBM, although it was Ben Rhodes and ThorSport Racing who opened the season with a pair of wins at Daytona. But its been all Kyle Busch Motorsports since and its the fourth time in series history that a manufacturer has started the season with six or more wins in as many races.

Toyota holds the Truck Series record with 10 consecutive wins to start a season set in 2014.

STARTING LINEUP
Keselowski, a two-time Kansas winner, will start on the pole Sunday based on the mathematical formula NASCAR is using for the majority of races this season. William Byron, who beat Hamlin to win at Homestead, will start outside on the front row.

MILESTONE MOMENT
Ryan Newman will tie longtime friend and mentor Buddy Baker for 18th on the career starts list when he takes the green flag for the 700th time. Harvick and Kurt Busch are the only other active Cup drivers with that many starts.

“Seven-hundred starts means I’m old, and that’s OK,” Newman said. “I’m experienced, lost more than I’ve won, just like everybody else in this sport, and it’s pretty cool to still be doing something this long that I’m so passionate about.”

Hamlin is the 11-2 favorite, according to FanDuel Sportsbook, while Kyle Larson and Martin Truex Jr. are next at 6-1 and Ryan Blaney and Brad Keselowski are 8-1. … Xfinity Series driver Matt Mills will make his Cup Series debut for BJ McLeod Motorsports in the No. 55 Ford. “There aren’t words to explain what Sunday will mean to my family and me,” he said. … Race sponsor Anheuser-Busch let fans vote on the name of Sunday’s race for $1 donations to Farm Rescue, a not-for-profit that supports family farmers. The result: the Buschy McBusch Race 400.

High school football: St. Pauls, a team from Robeson County, next up for Hornets