End of an era: Enochville Elementary looks back on 85 years of history 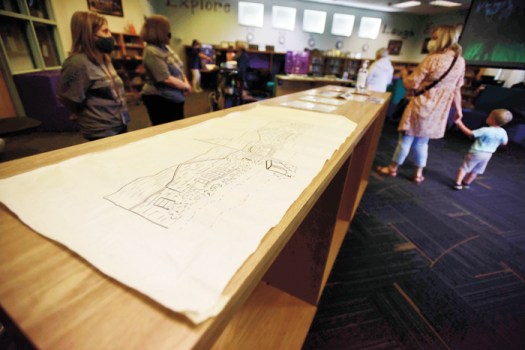 Carl Blankenship/Salisbury Post - A vintage drawing of the school scanned for commemorative shirts the school sold at cost. 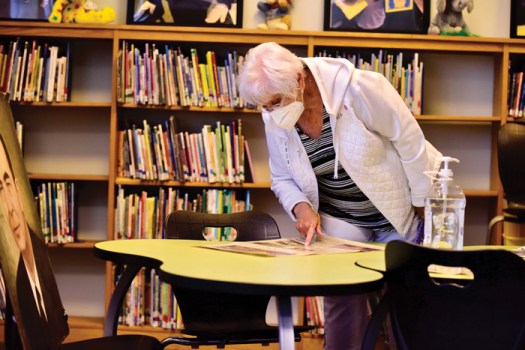 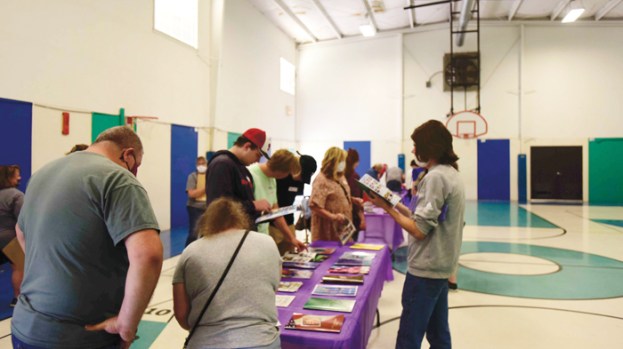 Carl Blankenship/Salisbury Post - Staff laid out copies of all the school's yearbooks in the gym. 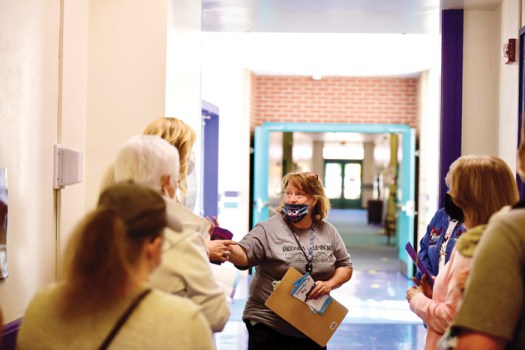 Carl Blankenship/Salisbury Post - Fourth-grade teacher Michelle Walser leading a tour from the original building to the addition built in 1996.

ENOCHVILLE — People got the chance to stroll through the halls of Enochville Elementary School on Saturday for some nostalgia before the school closes its doors for good.

This will be the school’s last month. Built in 1936, the school has local alumni that span generations. About 250 people — a mix of former staff, students and parents — signed up to take the tour.

Taken through by faculty members in groups, the tours started in the old front of the building. What used to be the front office area is now classrooms, but the auditorium looked familiar to everyone. The location of ceremonies and assemblies over the decades, most of the room is still original with vintage chairs, floors and curtains still in place.

The addition containing the current front office was built in 1996, and the school’s latest addition, a covered outdoor classroom space, was built in 2020.

A stuffed owl in glass has been the school’s mascot at the front office for decades. The bird was killed in a car accident and is housed at the school via special permit from the North Carolina Wildlife Resources Commission.

The tours snaked through the buildings and eventually arrived at the school’s gym, where yearbooks were laid out for former classmates to pore over.

The tour ended in the cafeteria where commemoratives were on sale along with T-shirts celebrating the school’s history on sale at cost.

Sue Pressley remembered when the kitchen was in a different part of the cafeteria, when the food was made from scratch and cartons of milk cost 2 cents.

Pressley went to Enochville more than 60 years ago. She attended first through seventh grade at the school and started before kindergarten existed. She started school a bit early at five years old.

Pressley’s sister, Linda Vanwieren, said the school used to be filled with the scent of homemade yeast rolls baking in the kitchen.

Students would sneak out through the front windows during lunch and pick up snacks from the next-door convenience store. For the sisters’ birthdays, sometimes their parents would pick up donuts from the nearby Winn-Dixie and drop them off to share with the class.

The sisters said they are glad they had the chance to visit the school and saw people they had not run into for years.

Pressley said she understands things change, but it still hurts to see the school close. She hopes the building is not torn down.

Sally Blalock, the school’s data manager, said the people she saw filtering through the media center had history to share, finding themselves in stories and photos published by the Salisbury Post and shared stories about the friendships they made.

“Everybody’s been really happy because they’ve reflected on their memories,” Blalock said.

Late in the morning, a large group of former employees and retirees visited the school. Enochville teacher Scott Burris said he did not know if there was anything he could tell the group, some of whom taught him how to teach.

Alice Clement spent 20 years at the school as a kindergarten teacher assistant and another five as a reading tutor.

“I hate to see Enochville School close down because I think it’s a wonderful neighborhood school,” Clement said, adding there was great camaraderie between the teachers and parents.

Her three daughters went to Enochville. When her last daughter started at the school, she was asked to come on as an assistant.

“I didn’t have to apply or anything. They just called me and asked me,” Clement said. “I was here all the time anyway.”

Holly Lowder was a fourth-grade teacher at Enochville for eight years. Her three boys went to the school, too. She remembers decorating the school to look like a cruise ship and students coming in to do activities at night.