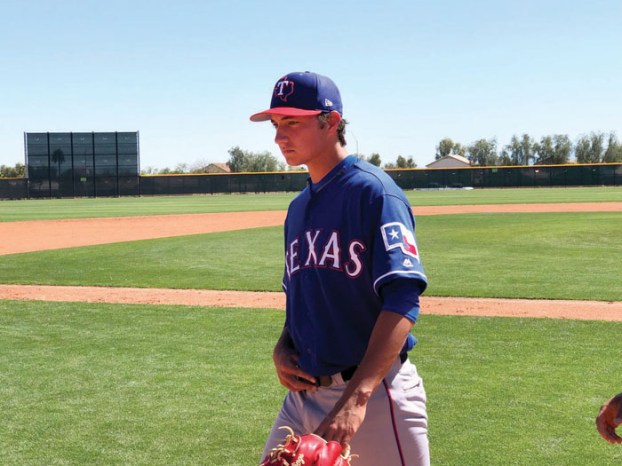 Owen White has bounced back from Tommy John surgery for a torn ligament in his elbow. File photo by Jeff Wilson/Forth Worth Star-Telegram

CHINA GROVE — There weren’t many highlights for Carson baseball on Friday in an 11-2 loss to South Rowan.

But even South fans were thrilled to see the most famous baseball player in Carson history. Paying a visit to his old stomping grounds was Owen White, who set school records for hits (139), runs scored (92), RBIs (82), doubles (40), pitching victories (32) and strikeouts (358) during a legendary four-year varsity career.

“Maybe you can make the headlines about Owen White being here and not the game,” Carson coach Chris Cauble suggested hopefully.

White’s fame as a  high school phenom extended well beyond the borders of Rowan County. As a senior in 2018, the pitcher/shortstop was named Gatorade Player of the Year for North Carolina, the state’s most prestigious baseball accolade. When the Texas Rangers picked White in the second round of the MLB draft, No. 55 overall, he passed on a University of South Carolina scholarship and became a member of the Rangers organization. He signed for $1.5 million.

Since then, it’s been a soap opera of injury, surgery, rehab, setbacks and illness, but White has waded it through it all and is preparing now for another homecoming.

This one will be on the mound.

Almost three years after the 2018 draft, White is on the eve of pitching for the first time in an official professional game. He’ll do it in Kannapolis on Tuesday night, debuting as the starting pitcher for the Down East Wood Ducks. He’ll be hurling about 17 miles from the town of Mount Ulla where he grew up. Compared to Mount Ulla, population 1,760, Kannapolis is a metropolis.

This will be a storybook tale, the kind of stuff you can’t make up. It will be truth far stranger than fiction. The local kid pitching against the local team.

“I’m fully healthy and ready to go,” White said with the relieved grin of a young man who knows what it’s like not to be healthy.

The Kannapolis Cannon Ballers were set to make their debut in the spring of 2020 when the minor leagues were shuttered by COVID 19 fears.

Now the Cannon Ballers are up and running again at scenic new Atrium Health Ballpark and are part of a vastly reshaped minor league landscape.  The South Atlantic League that the Kannapolis franchise was part of for so many years, is gone. Also gone is the Carolina League. In their place is the compact “Low-A East League,” 12 franchises located in the Carolinas, Virginia and Georgia. The downsizing has drastically reduced travel.

The four-team Central Division of the new league consists of the Cannon Ballers, the Kinston-based Down East Wood Ducks, the Carolina Mudcats and the Fayetteville Woodpeckers.

Teams will play six-game series, scheduled Tuesday through Sunday —  with an off day every Monday — for a period of 20 weeks. Each Low-A East plays 10 series at home and 10 on the road.

The new ballpark in Kannapolis already has played host to college and high school games, but things will start with a bang at 7 p.m. for Tuesday’s first professional game, especially with White providing the opposition.

The highest hurdle on White’s long journey to get here was Tommy John surgery in May 2019, before he ever got to throw a pitch in an official game. That 55-minute operation in which a tendon was taken from White’s hamstring and used to repair his right elbow, has dominated his life ever since.

The Rangers placed White on a conservative recovery plan to protect his health and to safeguard their substantial investment in his right arm. Following surgery in Texas, he embarked on a 16-month rehab road. There were days that included four hours of drills and exercises. The target date for full recovery was set as Aug. 20, 2020.

“It was a tough grind, but I think that process helped me mature and I learned a lot of little things,” White said.

White had a personal bout with COVID about two weeks before his rehab program was completed. His temperature soared to 103 degrees at the worst of it. He lost strength and weight and was knocked off his feet for about 10 days, but then he recovered.

White made his return to the mound from Tommy John on Sept. 21, 2020, a date he marked on his calendar. He pitched for the Rangers in a fall league. Regaining his command and pinpoint control was a process, but the velocity reports were encouraging. His fastballs were 92 to 97 mph. He threw disappearing curveballs and biting sliders with no pain.

Even with almost three years with no pro outings and no official stats, White is ranked as Texas’ No. 17 prospect. Scouts like his smooth delivery, poise and variety of pitches and are convinced that as long as he stays healthy, he has a future as a starting pitcher in the major leagues. His projected arrival date in the majors is 2024.

When White was assigned to the Down East Wood Ducks to begin this season, dreams once again started being replaced by reality.

That opening night game against the Cannon Ballers is a sellout. They could only sell tickets to 50 percent of seating capacity due to COVOD restrictions, but they no doubt could have filled the place up, with White adding to the normal opening-night attractions and celebrations.

Things will get back to normal Wednesday with a “Bark in the Park” event, where presumably fans can bring along their canine companions. Thursday is Thirsty Thursday, which needs no further explanation.

For the fans who do get to watch White pitch on Tuesday, he’ll look a lot different from the skinny kid they remember shooting 3-pointers (and occasionally dunking) for the Cougars and gliding around at shortstop.

The 18-year-old beanpole who was drafted is now a 217-pound 21-year old with a thick chest and arms. At 6-foot-3, he looks like a pro pitcher is supposed to look.

White, who will turn 22 in August, is living in Greenville, about 30 miles northeast of Kinston, where the Wood Ducks will play their home games at Grainger Stadium.

He plays golf and video games and works on baseball.

And counts the minutes until Tuesday night.