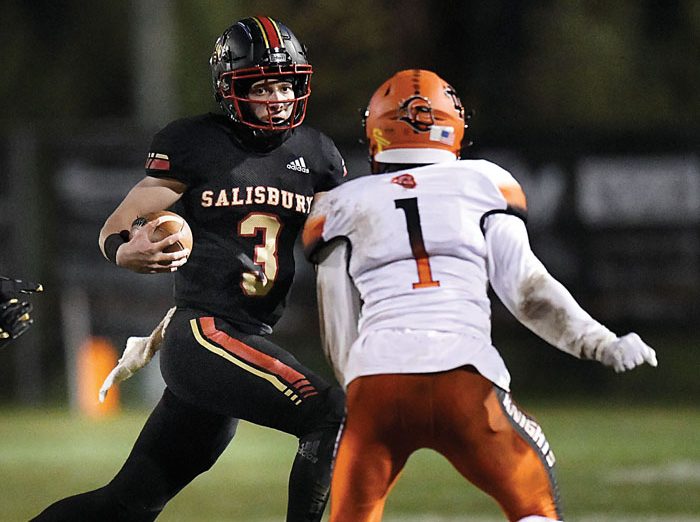 SALISBURY —  North Davidson receiver Jamarien Dalton and quarterback Tedric Jenkins have been recurring nightmares for Salisbury athletics in basketball gyms as well as on football fields.

The Hornets (7-2) get one last chance to beat Dalton, Jenkins and the rest of the Black Knights (8-1) on Friday in the 2AA West regional final. Kickoff in Welcome is at 7:30 p.m.

The winner advances to play either the St. Pauls Bulldogs (7-0) or the Washington Pam Pack (7-1) for a state championship. That title game will be played on Thursday night at 7 p.m. Whether it will be in Chapel Hill or Raleigh is is still to be decided. Washington was one of the eastern teams the Hornets stormed through in 2019 on their way to a state runner-up finish.

North Davidson is 4-0 against Salisbury in their recent squabbles, which have taken place as rivals in the Central Carolina Conference.

Both teams are coached by former Catawba Indians. Recently elected Catawba Hall of Famer Brian Hinson guides the Hornets. North Davidson coach Brian Flynn used to catch passes for the Indians. He was no Jamarien Dalton, but he was a very good player.

The first two Salisbury-North Davidson CCC meetings were annihilations — 45-0 and 49-13 — wake-up calls for the Hornets that they still had a long way to go if they were going to compete with the best in their classification.

Lessons learned, the Hornets fought fiercely in the last two. They fell 24-21 in 2019. It was 21-14 when the teams played six weeks ago at Ludwig Stadium.

Besides all the incentive that comes from wanting to get over that North Davidson hump, the Hornets have a lot going for them, starting with a great defense.

Jalon Walker, the junior linebacker committed to Georgia, will be playing with two hands this time. Due to a finger injury, he only had one in the first meeting with the Black Knights. He still had an 80-yard fumble return.

Salisbury’s whole defensive line is very tough — Zae Clay and Nick Hall in the middle and Kevin Hayes and Brandon Broadway on the outside.

Salisbury shut down North Davidson in the second half of their last meeting, but the Hornets couldn’t overcome an early 21-0 deficit. Hinson said the Hornets did some “sleepwalking” the first 12 minutes.

The Hornets, who have won five in a row, also have a good offense. Running back JyMikaah Wells is a sophomore who has the muscles of a college senior. He gets 25 or so carries in all the big games and he’s rushed for 1,208 yards and 15 TDs. The only game he didn’t have 100 rushing yards in was the South Rowan contest in which he carried five times for 65.

QB Vance Honeycutt provides the rest of Salisbury’s offense. He hasn’t thrown a ton, but he’s completing better than 50 percent. He has 836 passing yards and eight TDs. Honeycutt also has 668 rushing yards and 14 TDs. There have been at least three games that Honeycutt took over with his running ability.

Honeycutt was busy going 3-for-3, with a triple, in Salisbury’s baseball opener on Wednesday, but these are strange times, and athletes do what they have to do.

To beat the Hornets, you have to try to take away either Wells or Honeycutt. North Davidson chose to focus on Honeycutt in the first meeting this season and successfully executed that game plan. Honeycutt had 12 carries for a meager 7 net yards.

For North Davidson, Jenkins is the playmaker, an adventurous, big-game sort of guy, and he gets up for Salisbury. He’s tough to defend. Like Honeycutt, he can turn a busted play into a 30-yard run or a 30-yard pass completion, with his ability to move around.

Dalton, an Elon signee, is one of the state’s best athletes, a great basketball player who had a 50-point game this year, and he’s even better at football. He catches everything, even when he’s double-teamed. Salisbury may have to use Walker to help contain him.

North Davidson has a stout offensive line. That clash up front will be something to see. That’s strength against strength.

Defensively, North Davidson handled Oak Grove in a regional semifinal, mostly with two early pick-sixes. Dalton provided one of them.

North Davidson also has a major asset beyond Jenkins, Dalton and hard-nosed back Jaylin Walser. The Black Knights’ kicking game with Army-bound punter Jake Marion and kicker Riley Sullivan is spectacular. Normally, Salisbury has a kicking-game advantage with Honeycutt punting and Wade Robins kicking, but that advantage disappears against the Black Knights.

“They’ve got a D-I kicking game,” Hinson said. “You stop them at their 40 and you think you’ve done a good job on defense, but then they punt it 50 yards and you’re starting from your 10. They’ll flip the field on you in a hurry.”

As soon as the brackets were released, the Hornets figured that if they could make it to the regional final, top-seeded North Davidson would be providing the opposition.

Both teams have done their part to set up a potentially great game. Salisbury’s 10-7 win at Burns was an epic defensive struggle.

“Salisbury is fast,” Flynn told the Lexington Dispatch. “They’re athletic. They’re big. They’re strong. We were fortunate to go over there whatever week it was and win 21-14. Beat another team twice? Why not? You couldn’t have written a better script.”