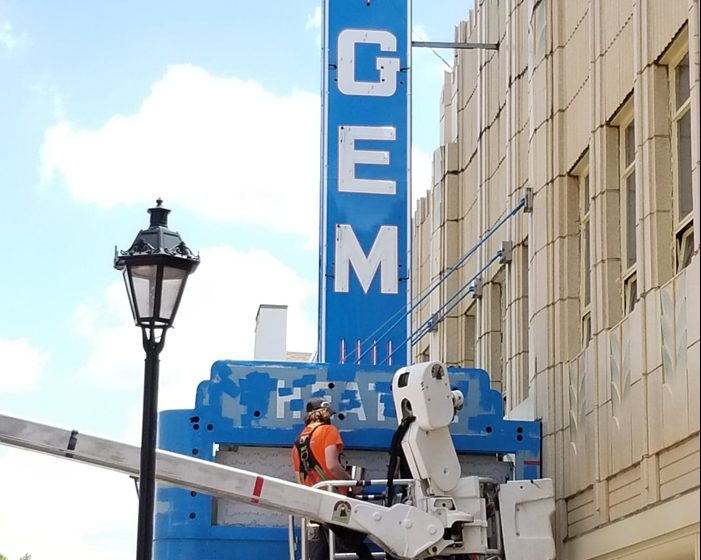 KANNAPOLIS — The restoration of the Gem Theatre marquee is in its final stages.

The marquee, which was originally constructed in 1936, had neon lighting was not operable. The city of Kannapolis, which owns the Gem Theatre, worked with Clearscapes and RiteLite Signs on a plan to  remove the marquee panels, restore them and put them back in place. The process started in February and the final steps are being completed this week with the marquee panels being reinstalled.

Great care was taken to preserve the historic authenticity of the marquee. Approximately 50 unique neon lighting pieces were reproduced with all new fittings and transformers. Original colors such as the distinguished blue on the marquee were restored as accurately as possible using special mixes.

The $1.1 million first phase of renovations also includes the addition of handicap accessible restrooms, event space and an additional exit corridor on the first floor and a new HVAC system.

The Gem is expected to reopen this summer once  renovations are complete. The city purchased the   property in 2015 as part of the Downtown Revitalization Project.

Steve Morris manages operations of the Gem, which opened in December of 1936. A fire nearly destroyed it in 1942 but it was rebuilt and reopened in 1948. It is one of the oldest single screen movie theaters with balcony seating in the United States. It was recently added to the National Register of Historic Places.