Celebrating spring: May Day festivities to be held at Utzman-Chambers house on Saturday 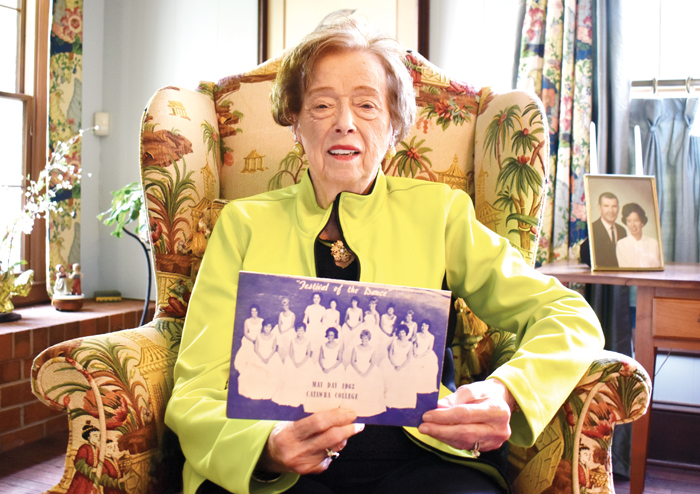 Betty Lomax holds up a program for the 1962 May Day celebration at Catawba College. Ben Stansell/Salisbury Post

SALISBURY — When Betty Lomax was hired as an assistant professor of physical education at Catawba College in 1948, she was handed the reins to the school’s May Day celebration.

Under her volunteer guidance, the annual spring festival became more than just a revelatory event — it was a spectacle.

“If you can imagine, a little school like Catawba set up two sets of bleachers and every seat was taken,” said Lomax, who will celebrate her 95th birthday next month. “It was completely full.”

Along with the traditional wrapping of the May Pole with bright ribbons, choreographed by Lomax, her May Day celebrations featured the presentation of a “May Court” and the crowning of a May Queen, all in front of dramatic backdrops like one of New York City’s skyline built by Catawba’s theater department.

The entire college was excited to participate in the celebration every year, Lomax said, from the girls in her physical education classes to the football players who lifted them into the air.

Karl Hales, the longtime public address announcer at Catawba football games, recalls emceeing some of the May Day celebrations. He credits Lomax with turning May Day into a must-watch event.

“Steeped in the tradition of cotillions and debutante balls, she brought out the best of the girl’s ability to dance,” Hales said.

Lomax, whose late husband Bobby was a well-known dentist, continued to grow the event every year until she retired around 1968. Although the celebration continued on for several years after, it has since disappeared from Catawba’s calendar. Similarly, May Day celebrations once held by civic groups and churches in the area have largely ceased.

On Saturday, May 1, Lomax will attend her first May Day celebration in years at the Utzman-Chambers House in downtown Salisbury. The event is being held by the Rowan Museum and Historic Salisbury Foundation as a part of National Preservation Month. Festivities will commence at 1 p.m. and finish around 4 p.m.

Saturday’s celebration might not have all of the pomp and circumstance of Lomax’s festivities at Catawba, but it will feature the ceremonious and colorful wrapping of the pole performed by dancers from To The Pointe Dance Company. Spectators will be asked to participate in the wrapping of the pole as well.

The Salisbury Youth Orchestra will kick off the afternoon with a performance.

Attendees will be able to make their own May Day baskets filled with flowers, candy and other goodies, which are intended to be delivered to a neighbor’s front door as a surprise.

Rowan Museum Executive Director Aaron Kepley said the activities on Saturday will mimic those traditionally associated with the holiday, which traces its roots back thousands of years to Roman and Celtic holidays that welcomed spring.

In America, May Day is still associated for some with the 19th century labor movement and the push for the eight-hour workday. International Workers Day is celebrated on May 1. 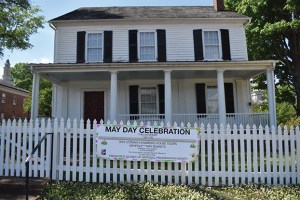 In addition to the May Day activities, the Utzman-Chambers House, the Josephus Hall House just a block away on S. Jackson St. and the Old Stone House in Granite Quarry will each be open for free to the public. Historical demonstrators, Kepley said, will be performing at the Hall House and Old Stone House.

“That day, we’ll have over 150 years of Rowan County history on display and open for people to come look at and participate in,” Kepley said. “It’ll be a lot of fun.”

The drive to host a traditional May Day festival came largely from the Rowan Museum’s board members, Kepley said.

Martha Lassiter, who helped organize the event, said the May Day celebration will kick off a summer of fun activities at the Utzman-Chambers House.

“(Rowan Museum) is wanting to utilize this little gem that we have in Rowan County which is the Utzman Chambers House,” said Lassiter, whose husband, Randy, is on the museum’s board of directors. “They’re wanting to make more people aware of it being there.”

Lassiter said the Rowan Museum is planning to host small events at the historic property on weekends throughout June, July and August.

Student quarantine numbers up, but not more than expected