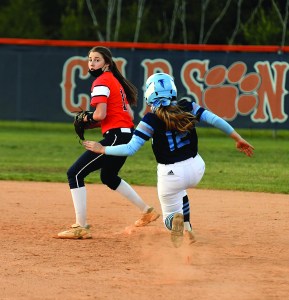 Taylor Walton pitched a complete game and struck out eight for the second-seeded Falcons (10-2).

Walton, Megyn Spicer, KK Dowling and Brooke Kennerly had two hits each for the Falcons.

Kennerly hit a solo homer in the fifth for a 5-1 lead.

Abbey Nixon had three hits for the Cougars (11-2), while Ellie Wilhelm had two.

Kary Hales took the loss in the circle.

Nixon had four hits and scored four runs, while Hales drove in four runs. Jaden Vaughn was 2-for-2 with two RBIs. Holly Stowe had two RBIs. Phoebe Cole was the winning pitcher.

The Cavaliers will be starting a shortened season on May 4.

Isaiah Black had three hits for the Wonders.

A.L. Brown made it exciting with a four-run seventh.

Connor Welker and Nick Alderfer had two hits each for the Chargers.

Caden Parker had three hits for the Trojans, and Caden Grider had two.

Tanner Kaler and Mason Murdock did the job on the mound.

East Rowan’s  Landon Shuping and Ryan Brady  were doubles champs in the North Piedmont Conference and advanced to regional play.

The Cougars are 10-3, with all three losses to South Iredell.

West Davidson got two goals each from Sara Koontz and Olivia Snyder and beat South Rowan 5-2 in Central Carolina Conference action on Thursday.

Rymer had 243 kills this season.