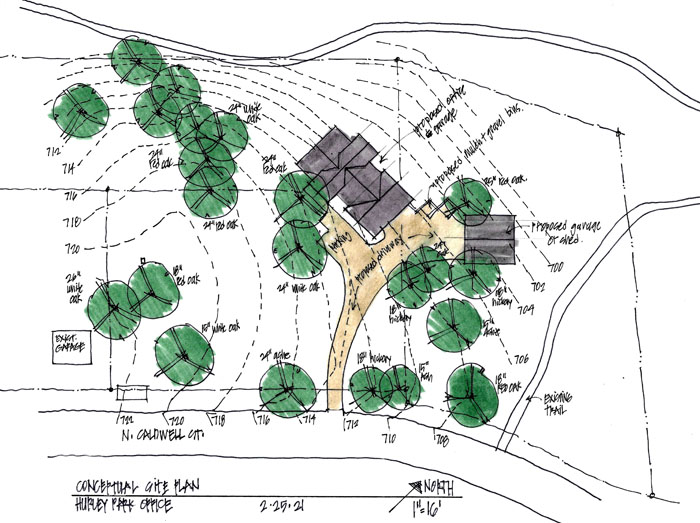 Courtesy of Gray Stout — Charlotte-based Gray Stout AIA is currently working with the city's Parks and Recreation Department and the Hurley Family Foundation to construct a nearly 1,600-square-foot central operations building near the center of Hurley Park in Salisbury. Construction is anticipated to begin this summer.

SALISBURY — The Salisbury Planning Board on Tuesday approved the rezoning of six parcels at Hurley Park in anticipation of a central office structure to be constructed later this year.

A number of land donations have been made to the city for the park as far back as the 1940s. Jane Ritchie, board chair of the Hurley Park Foundation, said the intent Tuesday was to make all six parcels within the park consistent. Planning Board members approved the “downgrade” to “open space preserve,” which is one of the most restrictive zoning districts.

Ritchie said the area along Craige Street, near the intersection of West Henderson, was donated to the city in the ’40s and had always been part of the park’s master plan dating back to the 1980s. Currently, a dedicated garden and park sign are stationed there.

Courtesy of Gray Stout — Charlotte-based Gray Stout AIA is currently working with the city’s Parks and Recreation Department and the Hurley Family Foundation to construct a nearly 1,600-square-foot central operations building near the center of Hurley Park in Salisbury. Construction is anticipated to begin this summer.

In the ’90s, the Hurley family donated more land before subdividing into parcels. A parcel located along North Caldwell Street was donated to the city in 2014 for fear it would be rezoned for another development.

Ritchie attributes the inconsistent zoning as an oversight issue.

A resident of North Craige Street and a resident of West Henderson Street submitted comments indicating their support of the rezoning.

Though Tuesday’s request was only related to zoning, Salisbury City Parks and Recreation Director Nick Aceves and Ritchie explained plans for a building to be constructed this summer. Aceves said the plan is to create a nearly 1,600-square-foot operations center with a detached garage near the center of the park space nestled between North Craige Street and Hobson Road.

Currently, Hurley Park staff utilize a single-wide trailer on Franklin Street, which can result in “inefficiencies” for equipment storage and transfer. Additionally, a central building allows staff “to have a presence” at the park, especially with the ongoing issue of illegal dumping at and near the park.

Aceves said an additional building at Hurley Park will allow the City Park Recreational Center to maximize its storage of rental equipment — a much-needed and sorely missed source of revenue for the park.

Charlotte-based Gray Stout AIA is constructing the building, and the cost of the project will be covered by the Hurley Family Foundation, Aceves told the Post. He anticipates construction will last less than a year.

Barringer said plans for the office building structure will only be subject to a minor staff review.