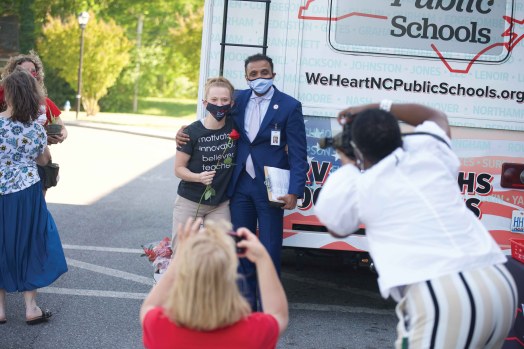 Carl Blankenship/Salisbury Post - China Grove Middle School Teacher of the Year Angela Ramey and RSS Superintendent Tony Watlington posing for a photo at the event. Watlington recognized a number of school teachers of the year along with nutrition staff and some students. 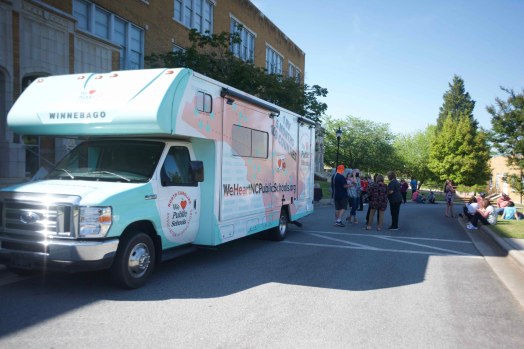 Carl Blankenship/Salisbury Post - This RV has been making its way to every county in the state for weeks. It visits Mooresville on Wednesday.

SALISBURY — Leslie Abbott has been driving across the state in an RV for public schools advocacy for weeks.

Abbott, a former union representative, was asked to help out with the N.C. Association of Educators’ “We Heart Public Schools” tour to all 100 counties. On Tuesday, the tour RV made a stop at Salisbury High School to celebrate with the local affiliate.

Abbott said the RV has been visiting five counties per week. Rowan was No. 65 on the list. Today, the association will appear in Mooresville.

In Salisbury, there was food, music and activities for kids.

The highlight of the event was recognizing school nutrition staff, teachers of the year and student “Lovable Leaders,” presented by Rowan-Salisbury Schools Superintendent Tony Watlington.

This was also an advocacy event. A petition made the rounds with the Rowan-Salisbury Association of Educators on Tuesday pushing for local school boards and county commissioners to advocate for the state legislature to pass a budget that would fully fund public education.

The specifics of the state association’s platform include a $15 minimum wage for support staff, a nurse in every school, additional social and emotional support employees, and a school bond.

Rowan association President Rena Taylor, a Southeast Middle teacher, said the campaign is part of an effort to hype up public schools in a difficult year.

“We’re also encouraging this not to be a party only for our NCAE members, but also for anybody that works for the school system,” Taylor said.

Watlington has been a member of the state association for 26 years, his entire career.

He is a member, he said, because NCAE does a better job than any other organization advocating for public schools to make sure they are funded and staff get what they need.

He also would like to see more educators in the county consider joining the organization if it means they will be better advocates for public schools, adding the schools need all the support they can get. All school staff members are in this together, he said.

“It takes a village to raise a child and it takes a village to educate a child,” Watlington said. “We couldn’t make it without bus drivers who bring us to school, cafeterias who feed us and custodians who keep the buildings clean, warm and well kept.”