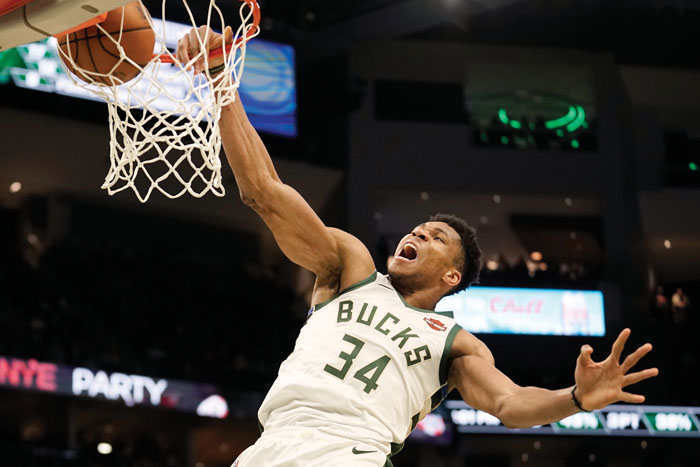 CHARLOTTE —  Giannis Antetokounmpo wasn’t about to let the Milwaukee Bucks get swept by the Charlotte Hornets this season.

Antetokounmpo had 29 points, 12 rebounds and eight assists, Brook Lopez added 22 points and the Bucks held off the Hornets 114-104 on Tuesday night to avoid losing all three matchups this season.

Antetokounmpo seemed determined not to let that happen again.

The two-time NBA MVP played with aggression, finishing 11 of 19 from the field and 5 of 5 from the free throw line.

“We came out with focus knowing they had beat us twice,” Antetokounmpo said. “We wanted to get one and not get swept. … For sure everybody was locked in and extra motivated to win this game.”

Antetokounmpo got fired up midway through the game when he thought Charlotte’s P.J. Washington intentionally tried to trip him after Antetokounmpo stole the ball from him. Antetokounmpo pointed his finger at Washington — and some replay angles appeared to justify the Greek star’s anger over the play.

“His leg came with force,” Antetokounmpo said. “I was upset because it was a dangerous play. I was about to (run) and I felt like he tripped me a little bit. But he plays hard and I respect every single of one them. But if you’re coming at me, I’m going to come at you, especially if I think you’re doing it in purpose.”

Bucks coach Mike Budenholzer stuck with Lopez in the middle. The 7-foot, 282-pounder responded in a big way, shooting 9 of 12 from the field while dominating the paint at both ends of the floor.

The Bucks outrebounded the Hornets 48-38.

“It was a kind of strange, when (Hornets center Bismack) Biyombo came into the game we were going the opposite way,” Budenholzer said. “But Brook was really big tonight — literally and figuratively.”

Milwaukee built a 62-45 halftime lead behind 15 points and eight rebounds from Antetokounmpo while the Bucks’ defense held the Hornets to 4-of-18 shooting from beyond the arc.

The Hornets battled back to cut the lead to 103-99 with four minutes left to play but Terry Rozier missed a key 3-pointer and Antetokounmpo answered with a dunk off a lethal spin move at the other end. Middleton then added a 3-pointer from the left wing off an inbounds play to push the lead to nine.

Rozier had a rare off night for the Hornets, finishing with eight points and going 0 for 7 from 3-point range. Despite the loss, Hornets coach James Borrego seemed pleased with his team’s effort. “I feel like our attention to detail and our urgency and our competitive spirit’s there,” said Borrego, whose teams remains without Gordon Hayward, LaMelo Ball and Malik Monk due to injuries. “We’re moving in the right direction.”