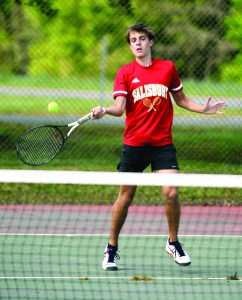 Salisbury’s Will Koontz. Photo by Wayne Hinshaw, for the Salisbury Post.

LEXINGTON — Salisbury’s Will Koontz won 6-2, 6-4 against South Rowan’s Joey Caraccio in the singles final of the Central Carolina Conference Tournament on Tuesday.

Both players are juniors.

Koontz bounced back from a loss to Caraccio late in the regular season.

The conference tournament is a qualifier for regional play that will be hosted by Salisbury. The top seven singles finishers and top seven doubles teams in the tournament advance.

The North Piedmont Conference Tournament will be conducted at West Rowan on Thursday, with the top two singles finishers and doubles teams advancing to regional play.