The math is not good for Rep. Ted Budd.

In early April, the Rowan County congressman and representative for the 13th District started teasing a bid for North Carolina’s U.S. Senate seat. He announced his intentions Wednesday, saying he’ll join the field of candidates. One day earlier, he stoked speculation about what might be coming by posting a photo Tuesday of him next to former President Donald Trump. 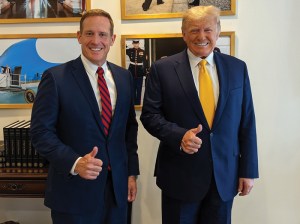 In this photo posted Tuesday on Rep. Ted Budd’s Facebook page, Budd poses with former President Donald Trump. Budd wrote with the photo, “Great meeting with President Trump over the weekend and discussing the future of North Carolina. Big things to come!”

He’s already got part of his stump speech ready, saying in an April 8 video the state needs people in Washington, D.C., who stand up for conservative North Carolina values. His announcement video criticized liberals, brought out the usual talking points and featured a monster truck named “the liberal agenda crusher.” But his path to victory could be tough.

The favorite in the Republican primary is former Gov. Pat McCrory. He lost the governor’s race by a slim margin in 2016 (10,277 votes) as Republicans won statewide races for president, U.S. Senate, lieutenant governor and a series of council of state positions. But he’s still the only Republican who has tasted victory in a statewide election. Because memories can be short in politics, it won’t be hard for voters who picked Roy Cooper over McCrory in 2016 to see the former governor in a new light with some new messaging.

Former U.S. Rep. Mark Walker made McCrory’s front-runner status clear when he launched criticism quickly after he announced, saying McCrory lost more statewide races than he won and failed in an attempt to score a gig in the Trump administration. But Walker’s criticism also means a massive swath of North Carolina voters picked McCrory for governor in 2008, when he lost to Bev Perdue; in 2012, when he beat Walter H. Dalton; and in 2016.

Many of the 2008, 2012 and 2016 voters will eagerly cast a vote for him in his next statewide election, particularly in Rowan County.

While McCrory made a political name for himself in Charlotte, the Catawba College graduate made plenty of friends in Salisbury and Rowan County. He’s also made plenty of references to the fact that he thinks of Salisbury like a second hometown. He’ll be able to call on the friends he’s made here in 2022 to help turn out the vote.

Budd, by contrast, doesn’t have roots that run as deep in Rowan County. He won an unwieldy primary with a big assist from the conservative Club for Growth and has cruised through primaries since then because of a lack of competition. He represented part of Guilford County until this year and continues to represent part the metropolitan area’s outlying communities. Mark Walker also was a Triad congressman until he decided not to run for re-election in 2020, which will make the competition for votes in the area more difficult.

Rowan County and the Triad, of course, aren’t the be all, end all of North Carolina’s GOP primary for U.S. Senate. Pre-existing name recognition isn’t either. However, Budd’s tough competition in all three areas — including two communities where he might otherwise have an advantage — are examples of the trail he’ll have to blaze now that he’s in the race.

If the “big things to come” involve a Trump endorsement, that’s good news for Budd. Otherwise, running for re-election would be easier.