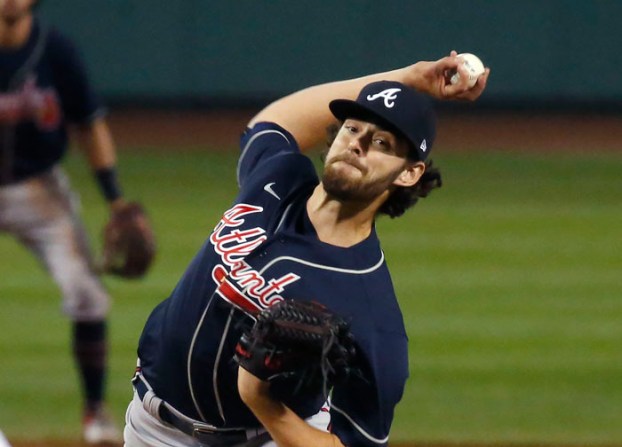 Anderson (2-0) won his second consecutive start, after throwing 6 2/3 shutout innings in a 4-1 win at Yankee Stadium last Wednesday. He walked only one Cubs batter and struck out eight.

Chicago held out Javier Báez and Kris Bryant with injuries in its fourth consecutive loss.

A rookie making his 11th career start and fifth this season, Anderson lowered his ERA to 2.48. The 22-year-old right-hander has provided an important boost for a struggling staff. The Braves began the night last in the National League with their 4.89 ERA.

A.J. Minter pitched a perfect eighth. Nico Hoerner’s one-out single off Jacob Webb in the ninth was Chicago’s second hit, but Webb struck out Willson Contreras and David Bote to end the game.

With one out in the fifth, Acuña pulled a belt-high fastball from Trevor Williams (2-2) for the longest of his eight homers this season. The drive traveled 481 feet and landed near the top of the seats in left-center field.

Acuña tossed his bat and slapped his chest with both hands as he left the batter’s box for his jog around the bases. The homer was his first since April 15.

Williams then walked Freddie Freeman, who scored on Ozzie Albies’ double off the right-field wall for a 2-0 lead.

Albies added another double off Brandon Workman leading off the eighth and scored on Dansby Swanson’s single. Hoerner’s error at shortstop on Austin Riley’s grounder set up pinch-hitter Pablo Sandoval’s run-scoring single up the middle.

Workman walked Acuña to load the bases and also walked Freeman, forcing in the third run of the inning.

Jake Marisnick led off the third with a single for Chicago’s only hit off Anderson, but Marisnick was stranded at second base. The only other baserunner against Anderson came on Jason Heyward’s walk with one out in the fifth.

Cubs: Bryant was rested due to right biceps soreness. Chicago manager David Ross said Bryant has dealt with the issue for about a week and was available as a pinch-hitter. … Báez missed his second consecutive game with a sore hamstring. Ross acknowledged the injured list is a possibility for Báez “if it’s something that’s going to take multiple days.”

Braves: LHP Max Fried (strained hamstring) could return to the rotation next week.