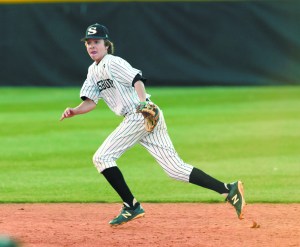 Mako struck out seven and didn’t walk a batter.

Cameron Padgett and Aiden Schenck had two hits each. Cobb Hightower, Austin Fulk and Schenck drove in runs for the Mustangs (2-0).

Gouge also had the key hit, a two-run single in the first. Hunter Watts knocked in a run for the Falcons (1-1).

Peyton Summerall got the save, with the help of a game-ending pickoff at first base by catcher Noah Loeblein and first baseman Matt Connolly.

Losing pitcher Jack Weaver had the South RBI. Jacob Ritchie had a double for the Raiders (0-1). •••

Vance Honeycutt was 3-for-3 with two RBIs. Chase Shoaf was the winning pitcher in relief and had three RBIs. Max Crawford had two hits and three RBIs. Will Webb scored three runs. Reed Fugle had two hits.  Ellen Yang had a hit.

WELCOME — East Rowan pitchers combined for 15 strikeouts as the Mustangs opened with a 9-4 non-conference win at North Davidson on Tuesday.

East starter Jake Hunter lasted into the fifth inning for the win. He allowed four runs but struck out 10.

Offensively, East (1-0) had only four hits, but the Mustangs took advantage of free passes and pieced together a six-run fifth that swung the game.

Morgan Padgett had an early two-run double and drove in three runs. Griffin Warden had an RBI single, while Cobb Hightower had a sac fly. Austin Fulk drew three walks.

Davie took an early 4-0 lead, but the Cougars (1-0) turned the game around with a seven-run fourth inning.

Davie scored twice in the sixth to get back to 10-9, but Hayden Simmerson pitched a scoreless seventh, stranding the tying run at third with a strikeout.

Mason Duren relieved Dylan Driver in the fourth and got the win. Simmerson earned a save.

Carson had 16 hits, with CP Pyle, Driver, Caden Hudson, Jake Harris, Jordan King, TJ Jones and Emory Taylor getting two each. King drove in three runs. Taylor had a two-run triple that put the Cougars ahead to stay.

Davie had seven hits, with Josh Westmoreland and Blake Little getting two each.

The Chargers held on  for a 9-6 win on Tuesday.

Cox Mill pitcher Cale Oehler was in complete control for five innings. He struck out seven as the Chargers took a 6-1 lead.

West was held to three hits, with Noah Loeblein getting two. His double was the biggest blow for the Falcons.

Jake Blevins started on the mound for West, pitched four innings and took the loss.

Steven Smith returned from a thumb injury earlier than expected, played shortstop and did some pitching for the Falcons.

A.L. Brown scored two runs in the seventh and won 2-1 on Monday against Northwest Cabarrus  at Atrium Health Ballpark.

It was scoreless for five innings, with Northwest’s Michael Gracer pitching vs. the Wonders’ Chase Argabright.

Brycen Schenck scored the deciding run on a balk.

KK Dowling was 3-for-3. Brooke Kennerly and Megyn Spicer had two RBIs. Kenadi Sproul had two hits. Emma Clarke had a triple.  Taylor Walton pitched a two-hitter and struck out 10.

Games will be held Thursday, May 6, 2021 through Saturday, May 8, 2021. Each venue will host four games. Classifications will be assigned to a venue following the completion of the regional finals

On Thursday, the 2AA and 3AA championship games will be held at 7 p.m.

On Friday, the 3A and 4A championship games will be held at 7 p.m.º

The Country Club of Salisbury will be the site of  the 3A Midwest Regional that will begin on the morning of May 3.

The Revival at the Crescent will be the site for the 2A Midwest Regional on May 3.

Isley has scored 26 goals this season.

South Iredell won 8-0 against West Rowan in Tuesday’s other semifinal.

Carson will play at South Iredell today at 5 p.m. for the championship.

Salisbury concluded the regular season with a 5-0 victory over South Rowan on Wednesday and will be the Central Carolina Conference’s No. 2 seed for the  playoffs.

Sutton Webb started and finished the scoring for the Hornets, scoring three goals in the contest. Theresa Holland also scored a first-half goal for the Hornets (9-1, 7-1).

The highlight  was the Hornets’ third goal which came half way through the second half. Senior goalkeeper Caroline Clark, a four-year player, scored her first career goal at any level  on a cross from Webb.

Webb beat a defender, dribbled to the end line, and sent a cross to Clark who beat the keeper and set off a frenzy of congratulations.

“I’m thrilled for Caroline. She deserved her moment and earned it,” Salisbury coach Matt Parrish said.

Koontz won vs South Rowan’s Joey Caraccio in final. Both advance to regional.

Salisbury’s doubles team of Bennett Clark and Colin Donaldson placed sixth in the tournament to advance to the regional.

The NPC tournament is today at West Rowan.

East Rowan finished up the regular season with an 8-1 win vs. North Stanly.

The contest was a consolation game in the Central Carolina Conference Tournament. Salisbury finished 4-8.

Katie Peeler had two doubles for the Hornets. Ellen Yang had a triple.  Mallory Link had a hit.

Yang did the pitching for Salisbury and struck out eight.

THOMASVILLE — South Rowan  finished the season with a loss in a CCC tournament consolation game on Tuesday.

The Raiders dropped a 14-13 slugfest with East Davidson. The Golden Eagles scored the decisive run in the bottom of the seventh.

Avery Crowell and Sechler did the pitching for the Raiders.

Wydner was closest to the pin (2 inches). Pam Carver had longest putt.

Gray Stone’s Emberleigh Pauley-Brown was the runner of the year for YVC girls cross country. Gray Stone’s  Sherri Swaringen was the YVC Coach of the Year.

Gray Stone’s Judson Bullard was YVC Player of  the Year for boys soccer.  Gray Stone’s Budd Harrington was YVC Coach of the Year.

East Rowan running back Sammy Pinckney is the North Piedmont Conference Offensive Player of the Year.

Statesville’s Randall Gusler is the NPC Coach of the Year.

Statesville kicker Sam Buckner is the NPC Special Teams player of the Year.

South Iredell’s Michael Fisher is the NPC Coach of the Year.

East’s Rhett Teems is the NPC Coach of the Year.

North Iredell’s Dane Coltrane is the North Piedmont Conference Player of the Year for boys soccer.

West Rowan’s Alan Puglia is the NPC Coach of the Year.