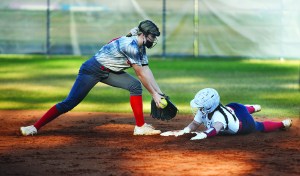 Third-seeded Central Davidson won 10-0 against sixth-seeded Salisbury on Monday in a first-round game in the Central Carolina Conference Tournament.

Rachel McCullough, Riley Peltz and Mallory Link had hits for the Hornets.

Salem Ward had a triple and a homer for the Spartans.

Cassidy Brinkley drove in two for the Black Knights.