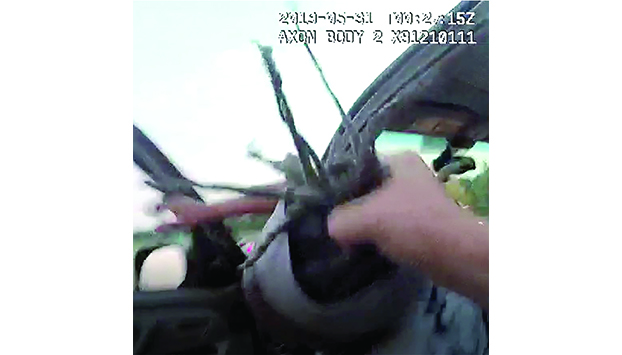 This image is a video still included with the federal lawsuit. In it, a law enforcement officer pulls Stephanie Bottom of of her vehicle by her hair.

SALISBURY — Following a federal lawsuit filed by a Georgia woman who claims Salisbury and Rowan County officers used excessive force against her in a 2019 traffic stop, the Salisbury-Rowan NAACP is calling for accountability and transparency from local law enforcement agencies.

“We released a statement because there’s a lot of concern on how these officers and the Sheriff’s department handled the situation, when they could’ve handed it much more professionally than that,” said Black, who was in Elizabeth City on Saturday taking part in state NAACP activity regarding the police shooting of Andrew Brown Jr.

Black said the Salisbury-Rowan NAACP’s legal redress committee came together to craft the wording and demands made in the letter after analyzing the available camera footage of the incident.

Bottom said she was driving to Raleigh for a funeral in May 2019 when she was pulled over for speeding and failing to heed to blue lights. The suit says she was going 10 mph over the speed limit — 80 mph in a 70 mph zone. That’s consistent with the incident report from the Rowan County Sheriff’s Office, which states that Rowan County Master Deputy Mark Benfield tried to stop Bottom around Julian Road.

Bottom said she was listening to music loudly in her car and did not realize she was being pulled over, according to the lawsuit.

After Benfield’s initial attempt to pull Bottom over, a roughly 14-mile chase ensued and ended when law enforcement officers eventually flattening Bottom’s tires in Davidson County, according to the incident report. The incident report describes one point during the chase where Master Deputy M. Smith sped up to the side of Bottom’s vehicle and saw her put “her hand up in a manner that suggested she didn’t care or was not sure what was going on.”

Stop Sticks, a tire deflation device, were deployed and punctured Bottom’s tires, forcing her to pull over on the shoulder of the road near the point where I-85 splits into I-85 Business near the Davidson County Airport.

In the lawsuit, Bottom says law enforcement officers used excessive force, drew their guns during the stop, pulled her out of the car by her hair and tore her rotator cuff. Bottom is seeking a jury trial, compensatory and punitive damages as well as court costs and attorney’s fees.

The video was released to the Charlotte Observer by Bottom’s attorneys, but has not been released publicly. While state law allows people pictured in body camera videos to receive a copy, the Rowan County Sheriff’s Office and Salisbury Police Department are prevented from releasing the video without a court order.

The first of five demands listed in the Salisbury-Rowan NAACP’s letter to local law enforcement is for the agencies to release the officers’ body camera video and the dash camera video in the traffic stop incident.

Black said he isn’t hopeful that the demand will be fulfilled. As for the other demands, Black said he thinks those could be delivered upon easily.

“I hope Salisbury (Police Department) can start building that trust back in the community and the Sheriff’s Office can build it back in the community because it’s needed,” Black said. “We need law enforcement to serve and protect. Law enforcement officers and sheriff’s deputies are held to a certain standard and they should live up to that standard.”

In addition to calling for the release of video footage, the Salisbury-Rowan NAACP is demanding a “transparent investigation” into the incident. Black said he was frustrated with the fact that the incident and the impending lawsuit were only brought to light recently.

The NAACP’s letter also demands a “review of current policies,” which would include the NAACP receiving a copy of all law enforcement policies and procedures of each agency.

After a review of those policies, Black said he would like to see the creation of a new zero-tolerance policy that would establish “an approach in penalizing and/or prosecuting police officers who engage in unethical acts when interacting with unarmed, non-violent and non-resisting individuals.”

The letter’s last demand is an update to the Rowan County Sheriff’s Office mission statement to “include inclusive language of professional law enforcement services being provided to visitors.”

Black said he would like to see an updated mission statement that features language pertaining to people like Bottom, who may only be visiting Rowan County or simply passing through.

“We’re not asking for much,” Black said. “We’re asking for simple things that should already be in place.”

Black said he has not yet received any communication back about the letter, but mentioned that it was only sent out on Saturday. The Salisbury Police Department and Rowan County Sheriff’s Office could not be reached for comment by publication time.