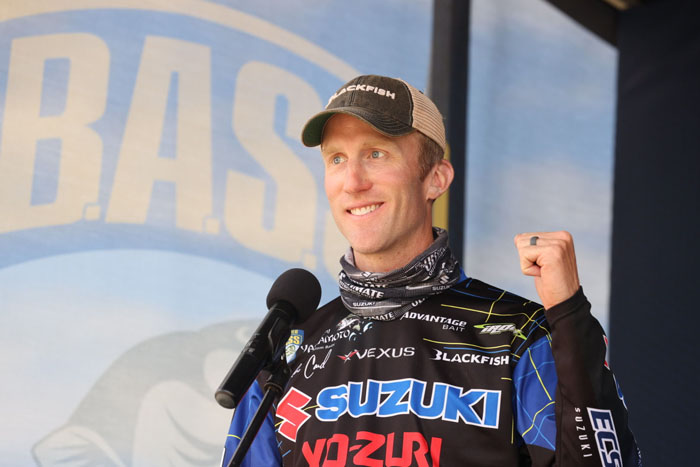 QUITMAN, Texas — Despite a slow start, a big loss and a painful injury, Brandon Card of Salisbury caught a Day 3 limit of 21 pounds, 10 ounces and retained the lead Saturday at the Guaranteed Rate Bassmaster Elite at Lake Fork.

Entering with an 11-ounce lead over Louisiana pro Quentin Cappo, Card bolstered his first two days of 27-6 and 28-1 to tally a three-day total of 77-1. Card heads into today’s final round with a 3-pound cushion.

Camping in Little Caney Creek the first two days, Card spent most of his time on a shallow point he called his “hammer hole” and leveraged a shad spawn for the majority of his fish. on Saturday, he had to make position and presentation changes.

“My morning bite was completely dead today, and I only caught two little fish on my Hammer Hole,” said Card, who was rookie of the year in 2012. “I moved to another spot about 7 to 8 minutes away and fished one of the schools I had found.”

After catching bass on a jerkbait, swimbait and crankbait throughout the first two days, Card made a key adjustment and pulled out a half-ounce white hair jig. Noting that this bait has served him well on Tennessee River reservoirs, Card said he felt the fish needed a different look and the pulsing hair skirt seemed to be triggering reluctant bass. He also caught fish on an unnamed crankbait. That 10- to 14-foot diver definitely helped his cause, but not without significant grief.

“I lost a 6-pounder on that bait and then the next cast, I hooked a 2-pounder that shook as I was releasing it and stuck a hook in my (right index finger),” Card said.

He and his marshal tried to remove the hook with the common technique of pushing down on the shank to rotate the barb angle and then using no-stretch braided line, tied to the bend, to snap the hook free.

Two attempts failed, so Card had to push the hook through his skin far enough for fellow competitor Matt Herren to clip the point and barb. From there, the hook easily slid back out of his finger. “I had two options: I could go to the emergency room or I could push it through,” Card recalled. “Thankfully, my finger was numb, and it really didn’t hurt as bad as it looked.”

Card said he still believes in his “hammer hole” has potential, so he’ll give it a good look today and adjust as needed. With only the Top 10 anglers fishing, he’s expecting greater freedom of movement.

“I really put the time in during practice and spent hours upon hours idling and not seeing anything and I found three schools of fish (in Little Caney),” Card said. “Hopefully, between those schools, it will hold up and we can go catch another big bag tomorrow.”

The forecast is for warm, stable weather, so Card has this final-round expectation: “There have been a few of us flirting with 30 pounds this week. I think somebody will catch 28 to 30 tomorrow.”

Cappo is in second place and Chris Zaldain of Fort Worth, Texas, is in third. The final weigh-in will be held at 3 p.m. at Sabine River Authority (SRA) — Lake Fork.

Live coverage of the event can be streamed on Bassmaster.com and the FOX Sports digital platforms. FS1 will also broadcast the action live with the leaders beginning at 7 a.m. CT.