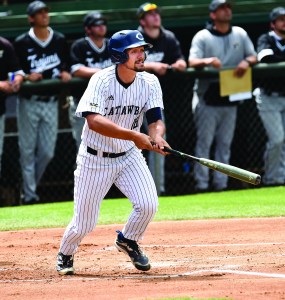 The Indians, who routed Coker in their first tourney game, fell 9-8 in 10 innings to Newberry late Saturday night at Smokies Stadium.

Played in dreary and damp conditions, the game included a fifth-inning rain delay of more than an hour.

Catawba got down 7-0, but came back to tie the game 8-all on Dylan Wilkinson’s three-run homer in the top of the eighth inning.

Newberry pushed across a run in the 10th against Catawba closer Robbie Cowie, the seventh pitcher used by the Indians, to win it.

Lee Poteat had a triple and two RBIs. Bryce Butler had two hits.

The top-seeded Indians were knocked out of the double-elimination tournament with an 8-7 loss to Wingate on Sunday.

Jeremy Simpson had a three-run double as the Indians took a 4-0 lead in the top of the third.

Catawba fell behind 7-4, but scored three runs in the eighth to get back to 7-all.

Wingate won in the bottom of the ninth against Catawgba’s sixth pitcher, Bryan Ketchie, who was making a rare relief appearance. The Bulldogs got two infield hits before Carson Simpson came through with the winning hit.

Hunter Shepherd had two run-scoring hits for the Indians (32-9). Joe Butts went 3-for-4 and had the game-tying double in the eighth.

The tournament concludes Monday. Carson-Newman hasn’t lost yet. Wingate has one loss. Newberry held a 14-6 seventh-inning lead on Tusculum late Sunday night in an elimination game.

The tourney will conclude with at least two games — and potentially three — on Monday.

Catawba will hope for an at-large regional bid.