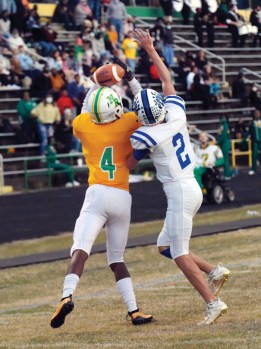 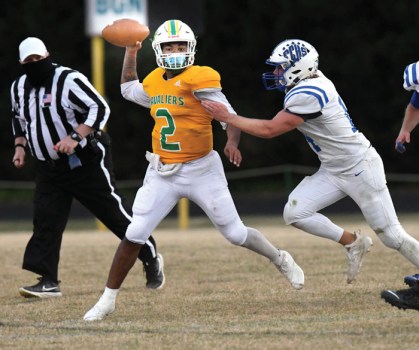 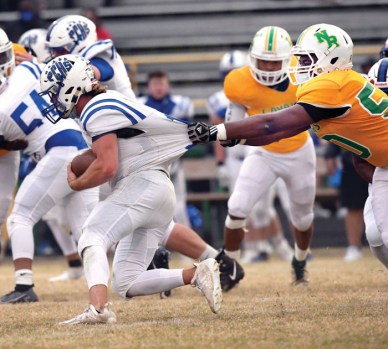 North Rowan's Kj Krider 50 has the jersery of PC's Angus Weaver 14.. photo by Wayne Hinshaw, for the Salisbury Post 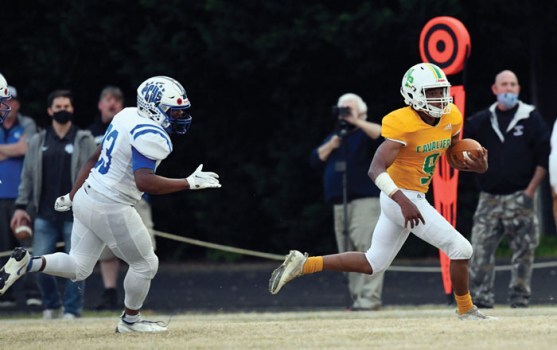 North Rowan's #9. photo by Wayne Hinshaw, for the Salisbury Post

SPENCER — The final chapter has been written — and it’s not a happy ending for North Rowan’s football team.

Two fourth-quarter turnovers and a couple of near-misses spelled out a second-round exit for the Cavs in Friday’s season-ending, 30-27 loss to visiting Polk County.

“Our kids played hard,” losing coach Nygel Pearson said, moments after fourth-seeded North (5-3) was pink-slipped out of the 1AA state playoffs. “They played their butts off. I mean, we were down 20-0 with like six minutes to go in the first quarter and we came all the way back.”

On a night when North accumulated 408 yards of total offense, the yard they failed to gain as the first half expired that may have decided the outcome.

“That was the play of the game,” said winning coach Bruce Ollis. “If they get in right there, who knows?”

The Cavs crawled out of that early, three-touchdown crater and took a 21-20 lead with less than a minute remaining in the first half. Then a two-handed interception by charging defensive lineman Ke’Shon Dollard gave North a golden opportunity to bury the Wolverines (6-1) before the break. On first down from the Polk 30-yard line with just 1.3 seconds dangling on the clock, quarterback Kyree Sims went deep down the right side to sophomore wideout Amari McArthur — who made a spectacular, hang-gliding catch at the one, only to be wrestled to the turf by freshman Keaundrae Green just inches short of the end zone.

“When I ran the route, I thought I was in the end zone,” McArthur reported. “I just didn’t know where I was.”

McArthur had a sensational game, making 11 receptions for 170 yards. Sims pitched his second consecutive complete game, dissecting PC’s defense for 269 yards and two touchdowns. He also rushed for 101 yards and a pair of TDs. Teammate Orion Harris, a junior receiver, caught four passes for 79 yards and two scores — all in the second period.

“It’s sad and disappointing,” said Sims, a warm smile masking his broken heart. “We wanted to come out with the W, but we started slow and that hurt us. They’re a very good football team, but in the end there wasn’t enough time on the clock.”

Sims completed 16 of 25 attempts, but his final pass was intercepted near the end zone by Polk cornerback Shane Parris with 2:44 remaining. “It was a very catchable ball,” McArthur noted. “Again, it was all on me. I should have run harder.”

The guests picked up three first downs on their final drive as time evaporated.

“These kids played hard for me all year,” said Pearson. “And I was hard on them. Bottom line, we’ve got to take better care of the football.”

That was especially true in the opening quarter — when Polk County recovered two fumbles, scored three touchdowns and threatened to run away and hide. Most damaging was the straight-ahead work of sophomore running back Angus Weaver, a 195-pound credenza in cleats who sent North’s linemen tumbling like bowling pins, finishing with 225 yards and three touchdowns. “Angus Weaver is a bull,” said Ollis. “He’s a horse.”

North linebacker Tsion Delaney won’t argue with that. “He ran like a man on a mission,” he said after recording three quarterback sacks. “He hit the holes hard and strong and kept going.”

North’s halftime lead was erased with 6:37 remaining in the third quarter, when an intentional grounding penalty in the end zone resulted in a PC safety. The Cavs reclaimed the lead, 27-22 late in the period, when Sims capped a 67-yard drive with a 23-yard touchdown scramble.

That set the stage for a disheartening final quarter. McArthur lost a fumble after making a 10-yard reception, ending North’s next-to-last possession on the 19-yard line. Five handoffs later, Weaver shouldered his way into the end zone for the go-ahead score. The Cavs final rally saw them march from their own six to the PC 42, only to be foiled when Sims’ heave down the left side was picked off and returned 40 yards.

When it ended, North’s players staggered toward their locker room, dejected and disappointed.

“Obviously there’s sadness,” said Delaney, who will join J.C. Smith’s team in the fall. “But we played a great team and nearly beat them. It was close the whole way and was actually fun playing them, I’ll say that.”

Added McArthur: “This is very tough. We’ve been out here working since last summer. Polk County came out here and showed they were a better team in the closing minutes. I respect them because they’re really good. But my team right here, I love them to death. I always will.”

NOTES: Eighth-seeded Polk County will carry a six-game winning streak into next Friday’s state semifinal at East Surry, the No. 2 seed. … North turned the ball over four times and forced three takeaways. Besides Dollard’s interception, DB Zion Milton had a pick and Kameron Cuthbertson recovered a third-period fumble. … The Cavs finished the season 1-3 at home and 4-0 on the road.