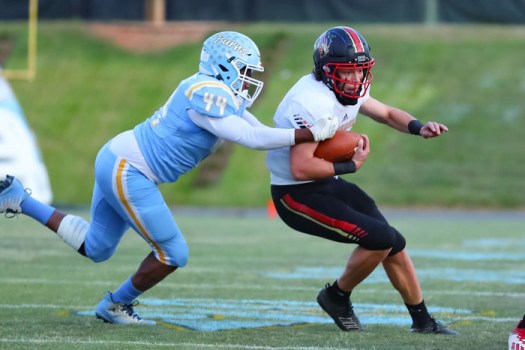 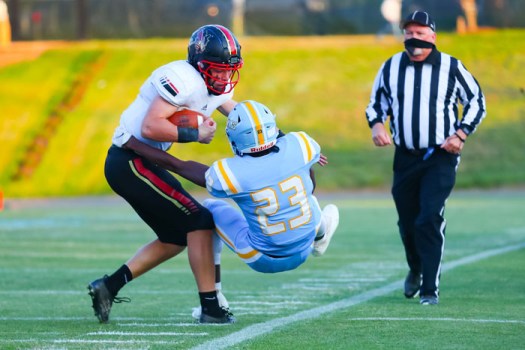 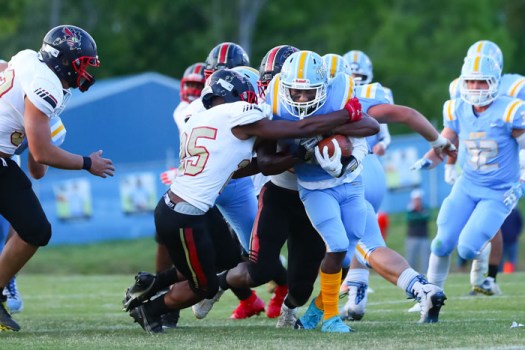 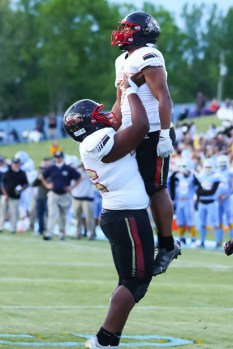 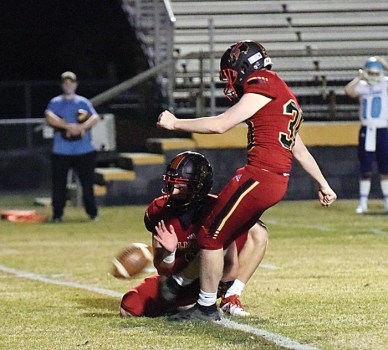 LAWNDALE — Jackson Murphy made the snap, Vance Honeycutt made the hold, and Wade Robins kicked a 39-yard field goal on the final play to lift Salisbury to a 10-7 win at Burns.

“One of the best, one of the most exciting high school football games you’ll ever see,” Salisbury head coach Brian Hinson said. “One of the best games I’ve ever been a part of. I thought if we had an edge anywhere on Burns it would be on special teams, and that’s how it played out.”

Burns (6-3) played without starting quarterback Cam’Ron Sweezy, who hurt a hamstring on the next-to-last play of Burns’ win against Hibriten. He was dressed but never entered the action. Sweezy’s absence put freshman Ben Mauney at the controls for Burns. Mauney wasn’t the running threat Sweezy would have been, but he acquitted himself well and threw for 102 yards.

Most of the problems Burns presented figured to be on the defensive side of the ball, anyway, and that also played out as predicted. Dorien Starnes, a 245-pound senior who signed with VMI, was all over the place. It was tough going for the Hornets, who had pranced all over Maiden in the first round.

“It was a lot like us playing against our own defense,” Hinson said. “Their defensive ends were really good and they took the outside runs away from us. Burns was every bit as good on defense as we expected them to be.”

Bruising sophomore JyMikaah Wells shouldered most of the offensive load for the Hornets, pounding away up the middle for 113 yards on 28 carries.

Burns’ third possession was halted by a fumble, and Salisbury linebacker Jalon Walker, the Georgia commit, was the guy who came out of the pile with it.

Walker’s recovery gave the Hornets the ball at the Burns 40. Vance Honeycutt’s 19-yard completion to Chase Shoaf transported the ball into the red zone. Wells hammered away from there on a mini-drive  that bridged the first and second quarters. With 10:56 left in the first half, Wells found the end zone from the 1 on a fourth-down play. Robins made the kick, and the Hornets led 7-0.

Burns answered with the most impressive drive of the night, nine minutes of sharp execution and lots of solid gains on run-or-pass options. Burns started on the Burns 9. Ninety yards later,  the Bulldogs had second-and-goal at the Salisbury 1, but a snap to a “Wildcat” QB was fumbled. Burns recovered, but now the ball was back at the 4. Then the third-down play ran into a brick wall in the form of Salisbury defensive lineman Kevin Hayes. Burns opted for the point-blank field goal on fourth down, but when it veered wide right, that mighty drive that nearly exahusted all of he second quarter netted no points.

“Huge defensive stand by us,” Hinson said. “Nine minutes, 90 yards, but no points.”

Wells hammered out two clock-killing minutes, and the Hornets took a 7-0 lead to the break.

“Our defensive staff did a good job of adjusting to their RPO stuff at halftime,” Hinson said.

The third quarter and first half of the fourth was all defense from both teams. Effective punts by Honeycutt usually kept Burns in dismal starting field position.

With six minutes left in the game, Salisbury inside linebacker Jayden Gibson picked off a pass near midfield and returned the ball to the Burns 12. Salisbury was flagged for an illegal block on the return to move it back to the 22, but the Hornets were in prime position to put the game away.

Three runs by Wells later, Salisbury was facing fourth-and-2 at the Burns 14 with 3:56 remaining, and Hinson had a decision to make. He called on Robins for a 31-yard field attempt.

“He kicks it, we’re up two scores, and I really like our chances,” Hinson said. “That’s one of those decisions that, as a head coach, if it works out, you’re a genius and if doesn’t you’re an idiot.”

There was nothing wrong with the decision, but it didn’t work out. Robins missed the field goal. It had plenty of distance, but the soccer star didn’t get it between the poles.

Burns still had life, and with 1:56 left to play, the Bulldogs had more than life. They had a tie game. Freshman running back Jeremiah Norris suddenly escaped down the sideline, got past the last potential tackler at the 10 and owned a 60-yard scoring jaunt. That made it 7-6. Garrett Geter’s PAT made it 7-7.

“It was a play they’d run quite a bit, but we had a linebacker take a bad angle on that particular play and get pinned inside,” Hinson said. “Then we miss a tackle and that running back can scoot.”

It was a stunning turnaround.

Salisbury had the experience and the poise to recover from it.

“Nobody put their heads down when it would’ve been easy to do that,” Hinson said. “We had the lead most of the night, and now, one big play, and we’re tied. We settled down, and the kids realized that the thing we needed was to get a good kickoff return. If we could execute on that, we still had time to win it.”

Marcus Cook fielded the kickoff and returned it to the Salisbury 36. That was good enough.

Honeycutt had been bottled up all night by Burns, but he made a big play. He connected with Murphy on a 37-yard pass that moved the ball to the Burns 28.

“Burns did everything right, but two kids made a play in our scramble drill,” Hinson said. “Honeycutt was running for his life, and Murphy adjusted and gave him someone to throw the ball to. A fortunate play for us and an unfortunate one for Burns.”

Honeycutt lost 2 yards on the next snap. But Wells gained 3 yards, and then he got 5 more to the Burns 22. Definitely field goal range.

Salisbury called a timeout with 2.4 seconds left. Salisbury still had one, although the scoreboard indicated the Hornets didn’t. Burns fans were not happy.

Hinson had no hesitation about calling on Robins to try another field goal, even though this one would be quite a bit longer than the earlier misfire.

“We haven’t had Robins at practice much because he also plays soccer and golf, but when we did have him the other day he kicked one from 47 yards that would have been good from 50-plus,” Hinson said. “And he kicked that one with some pressure. Sprints for the whole team were riding on it, and no one likes sprints at the end of practice. Everyone was interested in him making that one.”

Burns called a couple of timeouts to ice Robins, but Murphy and Honeycutt did what they were supposed to do on the snap and hold part of the equation, and Robins calmly split the uprights to keep the Hornets’ season alive.

“I was hoping I’d get the opportunity, and it’s an incredible feeling,” Robins said. “But this win isn’t on me, it’s on the whole team.”