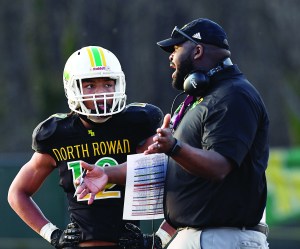 When the Cavaliers host Polk’s Wolverines Friday in a second-round 1AA football playoff game at 7 p.m., they’ll be looking to make amends for two frustrating losses.

If you’re a North fan you’re still convinced North should have won the 13-7 home loss to Polk in 2018, as well as the 30-22 road loss of 2017 that took place in Polk’s Blue Ridge foothills hometown of Columbus, about 30 minutes from Asheville.

The 2018 game boiled down to Polk facing fourth-and-2 at the Polk 41 late in the game and aggressively going for it. The surge of Polk’s offensive line got the first down, and Polk was able to run out the clock and keep North star Malcolm Wilson on the sideline. North didn’t punt all night, but scored seven points. That’s hard to do. Turnovers. Mistakes. Misery. That one was a serious upset, with North seeded third and coming off a first-round bye. Polk had entered the playoffs with a 3-8 record.

The 2017 meeting was quite a bit different. That one was supposed to be a tossup, but North appeared on the verge of blowing Polk out in the middle of the second quarter. The Cavaliers led 19-3 at one point. Jaleel Webster accounted for more than 300 yards rushing and receiving, but Polk had a big kickoff return and a big goal-line stand and North scored zero points in the second half.

A few current North veterans were on the field for those for those Polk tussles. Zay Davis, who is now the Cavaliers’ primary running back, for one.

Polk County head coach Bruce Ollis, an emotional guy who coaches with his gut and his heart, was in charge of the Wolverines in 2017 and 2018 and is still at the helm.

North’s defense has generally been stout, but the Cavs have experienced ups and downs offensively. North was shut out by strong 2A Hibriten in a non-conference game and was blanked again when it took on North Stanly in a game that decided the Yadkin Valley Conference championship.

The Cavaliers’ first four victories were achieved against  lightly regarded YVC opponents, so the jury was still out prior to last week. That’s when North (5-2) made some believers with a 66-26 dismantling of Community School of Davidson in the first round of the playoffs. North played at a different intensity level than it had shown during the regular season, stopping the run, forcing turnovers (six picks) and putting up serious offensive numbers through the air and on the ground. North achieved new season highs for passing yards (191) and rushing yards (355) on the same night.

Last Friday was Ollis’ birthday, but he made the trip to Spencer to watch North annihilate Community School and had to be impressed. It was 42-10 by halftime.

Ollis likes to scout teams in person when the opportunity is there. Sometimes it’s hard to tell how fast guys are on film. If opponents are slow, it can make guys look faster than they are.

Ollis found out North has a flock of tall receivers and some legitimately fast guys. That wasn’t a shock. Polk already has faced — and survived — Webster and Wilson, two North backs who were Rowan County offensive players of the year.

Ollis would have been coaching his team against North Stanly last Friday instead of watching North Rowan, but COVID issues knocked the Comets out of the playoffs and sent Polk to the next round via forfeit.

Polk (5-1) has weathered its own COVID struggles. A  positive COVID test shut the program down for two weeks, so Polk hasn’t played in a game since March 26.

In theory, that long layoff should be an advantage for North Rowan.

On the other hand, Polk has had a lot of extra practice time and probably had a chance to heal injuries.

North QB Kyree Sims has 554 rushing yards and seven rushing TDs, plus a pile of 2-point conversion runs. Sims has thrown for 717 yards and nine TDs.

Davis missed a game with illness, but has rushed for 581 yards and seven TDs. Freshman Jae’mias Morrow has been a big factor the last two weeks and has five rushing TDs.

Sophomore wideout Amari McArthur has 18 catches for 365 yards and five TDs, with the bulk of his production coming in the last two weeks.

Polk’s only loss was to Hendersonville back on opening night, Feb. 26.

Sophomore back Angus Weaver has rushed for 744 yards and 12 TDs for the Wolverines, who are normally a running team. Weaver has thrown the ball occasionally. He’s 2-for-2 for 89 yards and a TD, so the Cavaliers have to be prepared for a halfback pass.

Sophomore Casey Beiler is the Polk QB. He’s been impressively efficient, with 10 TD passes and only two picks. He’s thrown for 727 yards.

Weaver plays both ways and is an important defender as a linebacker.  Gage McSwain gets carries in the offensive backfield and has been a big factor on defense as a linebacker.

This is a second-round game, but with the condensed playoff format this season it’s a regional semifinal.  The winner advances to a regional final against the Pine Lake Prep-East Surry winner.

It’s a trip of more than two hours for Polk County from Columbus to Spencer.

Polk plans to make a stop on the way for a walk-through session at West Cabarrus High. West Cabarrus head coach Brandon Gentry is a former Polk County assistant.