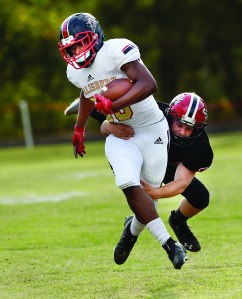 SALISBURY —  Salisbury heads to Burns for a 7:30 p.m. kickoff in the second round of the 2AA state playoffs on Friday, and no one is expecting another 52-12 blowout.

No one is expecting the Hornets to intercept five passes this week.

No one is expecting the seventh-seeded Hornets to only have to throw five passes this week.

The Hornets will be happy to get out of the Cleveland County river town of Lawndale, where sixth-seeded Burns is located, winning 14-13, 29-28 — or 2-0.

“Cleveland County football, it’s a different breed,” Salisbury head coach Brian Hinson said. “They play really good football there, and there are so many good football teams in that area that everyone plays a tough schedule. That helps prepare them for the playoffs.”

After losing early to Central Carolina Conference foes Oak Grove and North Davidson, two teams that will be squaring off in Welcome Friday in the 2AA playoffs, Salisbury (6-2) quite literally has been playing elimination games since Week 5.

Burns lost a conference game to neighbor Shelby, 20-18, in mid-March and the Bulldogs knew they couldn’t afford another league loss. They dropped a non-conference matchup to 3A Crest, but they finished 5-1 in league play. When South Point upset Shelby, Burns was able to share the Southwestern 2A title with Shelby.

Salisbury knows all about Shelby. Shelby’s defense did a number on the Hornets in the 2019 2AA state championship game.

Not many people picked Burns to beat explosive Hibriten in the first round, although Hinson was one of the ones who liked Burns’ chances. He gave Burns an edge because of the schedule it had faced. Hibriten hadn’t taken on teams like Shelby, Crest and South Point.

While Salisbury was destroying Maiden — that brutal carnage include 478 rushing yards to minus-something rushing yards — Burns was getting two rushing TDs from QB Cam’Ron Sweezy, including a game-decider with under four minutes to go, to slide past Hibriten and earn a second-round home game.

Burns’ offensive efficiency has fluctuated. Sweezy, the 6-foot-3, 180-pound QB, is a senior, but the running backs are young. Sophomore Lemont Wilson and freshman Jeremiah Norris have combined for nearly 1,100 rushing yards. Sweezy has accounted for 400 rushing yards himself and he’s thrown for 1,038. He has nine TD passes and only three interceptions.  The go-to receiver Ryan Thompson, who has 34 catches for 498 yards, is a sophomore.

It’s on defense where most experts believe Burns is special. Hinson doesn’t argue.

“They’ve two big interior linemen that are tough, and they’ve got a defensive end (No. 18, Alphonzo Goodson) who is only about 185 pounds, but on film, it looks like he’s been shot out of a gun,” Hinson said.  “His get-off is something else, and he’s disruptive. Then they’ve got an inside linebacker (No. 26, Silas Tate) that makes a tremendous amount of tackles. They’re going to put a lot of athletes on the field, some really talented kids.”

Salisbury seems to get better every week, as the DBs gain experience and the offensive line meshes.

The Hornets are not the same team they were a month ago. They know who they are now and what they can do.

They started figuring things out in the second quarter of the North Davidson game in Week 4— after they spotted the Black Knights 21 points — and they’ve been increasingly difficult to handle since that fork in the road.

Senior quarterback Vance Honeycutt is fast enough to create 70-yard keepers on option plays and has carried 93 times for 643 yards and 14 TDs. He’s 55-for-102 passing for 764 yards and eight TDs.

Marcus Cook has been the go-to receiver with 30 catches for 394 yards and four TDs. Jackson Murphy has three TD catches.

Freshman Mike Geter has shown flashes of future greatness when he’s gotten his hands on the ball as a back, receiver or returner.

Defensively, the Hornets are anchored by stout line play. Senior lineman Zae Clay has been selected for the East-West All-Star Game.

Junior Jalon Walker, a big and fast Georgia commit, has lived up to the hype every week since he got healthy and was devastating as a pass-rushing defensive end against Maiden. Salisbury can also employ him as an outside linebacker or safety. It will be a priority for Burns to know where he is on every snap.