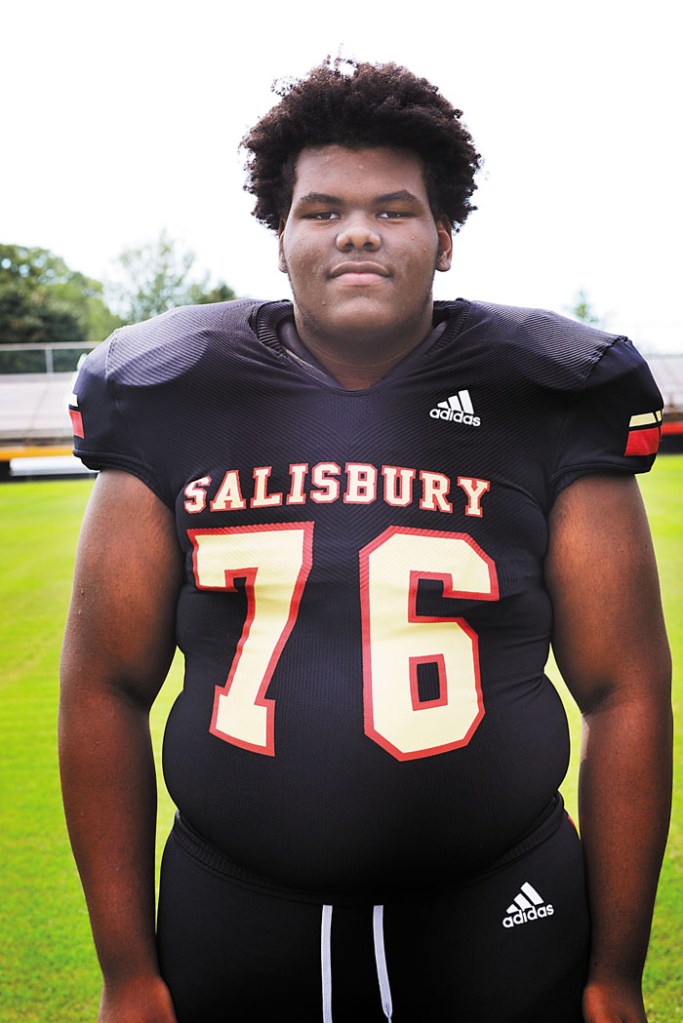 Jacquez Peele. Photo by Wayne Hinshaw, for the Salisbury Post

SALISBURY — Needing only a yard or so for a first down, Salisbury puts H-back Josh Hill in motion, sliding from right to left.

Hill comes to a stop just off the left shoulder of mammoth left tackle Jacquez Peele, who stands 6-foot-5, wears No. 76 and carries 333 pounds with no problem.

Maiden figures Hill will be the lead blocker, so defenders mass at the probable point of attack. There are eight blue jerseys in the box.

One tries to shoot the gap as the ball is snapped. He times it right, but he goes flying backwards as if he’s been hit by a bus. And so does the teammate he gets driven into. Now two tangled-up Blue Devils are on their backs, and it’s a double pancake for a pleased Peele.

Salisbury quarterback Vance Honeycutt is diving, anticipating getting hit, but there’s no one there. He easily gets 3 yards behind the carnage created by Peele, the chains move, and the Hornets are headed for a touchdown.

And so it went on in Friday’s first-round 2AA playoff game. Maiden was undefeated and playing at home, but size matters a lot. Salisbury was bigger and romped 52-12.

Peele didn’t block two guys on every snap, but he usually took care of at least one. Salisbury rushed for 478 yards — the previous season high was 311 .

Coaches lauded the offensive line, in general, and Peele in particular.

“Now that was a fun game,” Peele said. “We went out and executed how we’re supposed to. Probably our best offensive game.”

Peele has faced a lot of adversity in his life for a teenager. His mother died in 2015. His father passed in 2016.

Still, there was a time when it appeared unlikely Peele ever would be publicly praised for pancaking.

Despite the gift of size, he didn’t start playing football until he was a ninth-grader.

Bigger is generally better in football, but it’s possible to be too big. As a sophomore, Peele weighed 370.

That proved to be too big. He lacked stamina and mobility.

“When he first came out we didn’t have a lot of expectations for him, but he’s lost a whole lot of weight,” Hinson said. “And as he’s lost weight, he’s gotten progressively more athletic. For a man his size, he’s flexible.”

Hinson hoped two years ago that Peele might develop into a decent guard, but he’s shown more versatility than anticipated.

Offensive line coach Taylor Fender has been an advocate for Peele getting a chance to play tackle. He eventually won Hinson over.

The left tackle is the most critical pass-protector as far as shielding a right-handed quarterback such as Honeycutt’s blind side, but now the Hornets have entrusted Peele with that role. They’ve moved guys around quite a bit this season, trying to get everyone in the optimal spot.

Hinson said the offensive line is “a witches’ brew.” Sometimes it takes some experimenting to get everyone in the right place.

“I’ve really played all over,” Peele said. “But now I’m at left tackle, and I really like playing there. I’m in a lot better shape than I used to be. I’ve also gotten a little faster.”

Salisbury’s rushing totals have climbed in recent weeks. The Hornets topped  300 rushing yards for the first time this season against Ledford, then exceeded that total against South Rowan — even in a running-clock game. Then the Maiden game was at a different level. Honeycutt and sophomore running back JyMikaah Wells both surpassed 200 rushing yards, and the Hornets only had to put the ball in the air five times.

“We thought we would play well because we had our best week of practice,” Hinson said. “I don’t think anyone loves practice, but the truth is you play like you practice. Maiden does a lot of slanting and blitzing, but our offensive line was well-prepared and handled it. We took our time, communicated and executed.”

Peele did his job — and then some.

He’s making his family proud and he’s also embracing his slimmed-down role as a difference-maker for the Hornets.

“He’s quick to take off his shirt and put on his sunglasses when he gets a chance,” Hinson said with a smile. “But for pure size, he’s hard to beat. He’s so wide it’s hard to get around him, and there aren’t many guys who are going to try to go through him.”