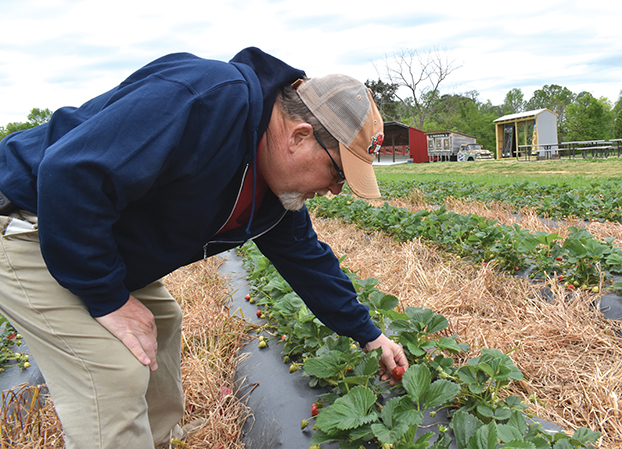 Randall Patterson bends down to examine a ripe strawberry in one of over a dozen fields filled with the fruit at Patterson Farm in western Rowan County. Ben Stansell/Salisbury Post

MOUNT ULLA — On spring days when he’s working among rows of burgeoning strawberry plants, Randall Patterson can’t help but reach down and pluck one or two of the ripe, red berries and pop them in his mouth.

“I’ll eat them all day,” said Randall, president and director of field operations for Patterson Farm.

There’s photo evidence of Randall indulging in a few freshly picked strawberries on his family’s farm in western Rowan County dating back several decades — when he was just a child. Back then, strawberries only grew on a few acres that are now used as a campground. As consumer demand has surged and technology has improved, the number of acres the red berries have consumed on Patterson Farm increased.

With 70 acres dedicated to three varieties of the fruit this year, Patterson Farm is one of the largest strawberry farms in the state. During strawberry season, which started last week and will likely stretch until mid-June, the farm is expecting its roughly 1.4 million strawberry plants to produce about that many pounds of fruit.

The red fruit has become so synonymous with the farm’s identity that strawberries are pictured opposite a couple of red tomatoes on the Patterson Farm logo, which is featured on shirts, hats and jackets worn by the farm’s small army of employees.

Those employees help plant, harvest and sell various produce grown on the farm, which includes everything from sweet corn to pumpkins. Tomatoes have long been the farm’s most prevalent crop, but the gap shrunk in recent years as both bell peppers and strawberries made up ground. 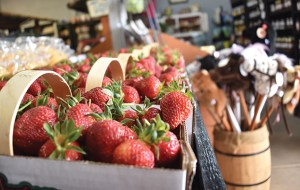 Patterson Farm sells its strawberries only a few hundred feet from the fied in its market, as well as in grocery stores up and down the eastern seaboard. Ben Stansell/Salisbury Post

The first, and perhaps most important, occurred in the 1970s when the farm switched from growing the fruit in matted rows to using plasticulture — wrapping the area around the plants in black plastic sheets that better control soil temperature, keep pests away and help the plant retain moisture. The implementation of plasticulture has lengthened strawberry season.

“My dad used to go out and try to find a strawberry May 3 because that was his birthday and before, when we was using matted rows, he seldom ever found one,” Randall said. “As soon as we went to this method, we started finding them. We started on April 16 this year.”

Another major boost came when the family decided it wanted to diversify its crop portfolio, planting fewer tomatoes and more acres of other crops, including strawberries.

The advent and exploration of new varieties of strawberry plants has also been impactful.

For a long time, Camarosa was the dominant berry grown on the farm. While it still accounts for about 30% of the farm’s strawberry crop, the new star of the show is Ruby June. The novice variety has impressed the Pattersons with its size, longer shelf life and high Brix value, a numerical way to track a fruit’s sugar content.

“We’re real excited about (Ruby June) right now,” Randall said. “It’s in its first one or two years and it might go the other route, but right now it’s just making everybody happy.”

Ruby June took up only a small portion of the farm’s land three years ago when the Pattersons first planted it, but now accounts for about 45% of the total crop. The remaining rows of strawberries are an established variety called Camino Real.

While the farm grows most of its crops from seed, it receives young strawberry plants from one of several suppliers in either California or Florida. The plants are placed in the ground in mid-October and are kept fertilized and watered during the winter months.

In the spring, as the plant reaches maturity, about 150 workers comb the Patterson Farm fields around dawn to pick red berries out from those that are still green. Early in the morning, before the warm spring sun has truly risen, is the best time to pluck strawberries.

“We try not to pick after lunch because you don’t want a lot of heat in the strawberries when you pick them because they won’t hold up as well,” Randall said.

Douglas Patterson, the vice president of Patterson Farm, said recently picked strawberries should be refrigerated immediately to be kept fresh longer. The quicker they’re eaten after being picked, he said, the better.

Once the strawberries are picked, most are packaged on site and shipped to supermarkets and customers up and down the eastern seaboard. Others are used to make jams, jellies and salsa.

For the first time ever this year, the farm is going to use strawberries picked from its fields to make homemade ice cream.

The rest of the strawberries are sold at one of farm’s two satellite locations in Salisbury and Concord or at the farm’s on-site market. The farm and the satellite locations (ordering available from 9 a.m. – 1 p.m) offer curbside pickup, which was implemented last year during the height of the COVID-19 pandemic. 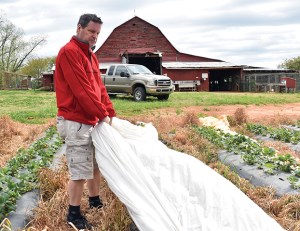 Douglas Patterson pulls a protective sheet over a row of strawberries, which is what the farm uses to keep its crop warm on cold spring nights. Ben Stansell/Salisbury Post

The pandemic forced the farm to rethink how it got strawberries to customers last year. Michelle Patterson, the farm’s director of fun and market and tour organizer, has led the charge on adapting to a pandemic. Some of the methods she’s helped implement, including the curbside pickup option, will likely stick around.

“We’ve learned a lot over the past year, and I think some of those things will make us better in the long run,” Michelle said.

The farm is once again allowing people to pick their own strawberries, but on an appointment-only basis starting on May 1. Reservations can be made online at visitpattersonfarm.com.

Patterson Farm may be the largest strawberry grower in the county, but it isn’t the only one. Mike Miller, of Millers Farm Fresh Produce in China Grove, said they will also be offering a pick-your-own option and encourages people to visit the farm starting on the second weekend in May when the plants are at full production. Wetmore Farm, Elium Berry Farm and Two Pigs Farm also typically grow and sell strawberries.

Strawberry farmers across the county will have shielded their plants last night and will do so again to protect them from temperatures dropping into the 30s.

City meets in closed session to consult with attorney…