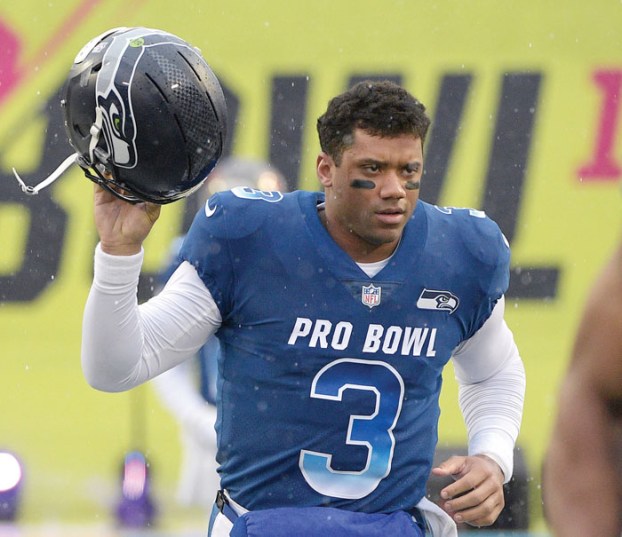 Quarterback Russell Wilson of the Seattle Seahawks will speak at graduation ceremonies scheduled for May 14-15 in Raleigh. He earned a degree in communication from NC State in 2010. (AP Photo/Phelan M. Ebenhack, File)

RALEIGH (AP) — NFL quarterback and N.C. State University alumnus Russell Wilson will return to the school this spring as a commencement speaker for the 2021 graduation ceremonies.

A news release from the university on Monday said Wilson will attend two in-person ceremonies scheduled on May 14 and 15. Both ceremonies will also be streamed live.

“We are honored to welcome Russell Wilson back to N.C. State to inspire our spring 2021 graduates at these very special commencement ceremonies,” Chancellor Randy Woodson said in a campus message. “Russell has always supported his alma mater well and represented N.C. State with class. We know our students, their families and our entire Wolfpack community will be excited to see Russell back home at Carter-Finley Stadium.”

Graduates will hear remarks from Wilson and university leaders. Woodson will confer two honorary degrees; one on Jeff Williams, chief operating officer at Apple, and one on Ashley Christensen, James Beard Award-winning chef.

Wilson earned a Bachelor of Arts degree in communication from the university in 2010. He played baseball and football for the Wolfpack.

At N.C. State, Wilson was a two-time Academic All-ACC selection and was named ACC Rookie of the Year and team MVP in 2008. He led the Wolfpack to two bowl games and became one of the top passers in school history. He also set an NCAA record for career pass attempts without an interception with 379.  Wilson was drafted to the Seattle Seahawks and has started every game since he joined the NFL in 2012. He was recently named the 2020 Walter Payton NFL Man of the Year.